The Covid excuse to implement pushbacks at sea 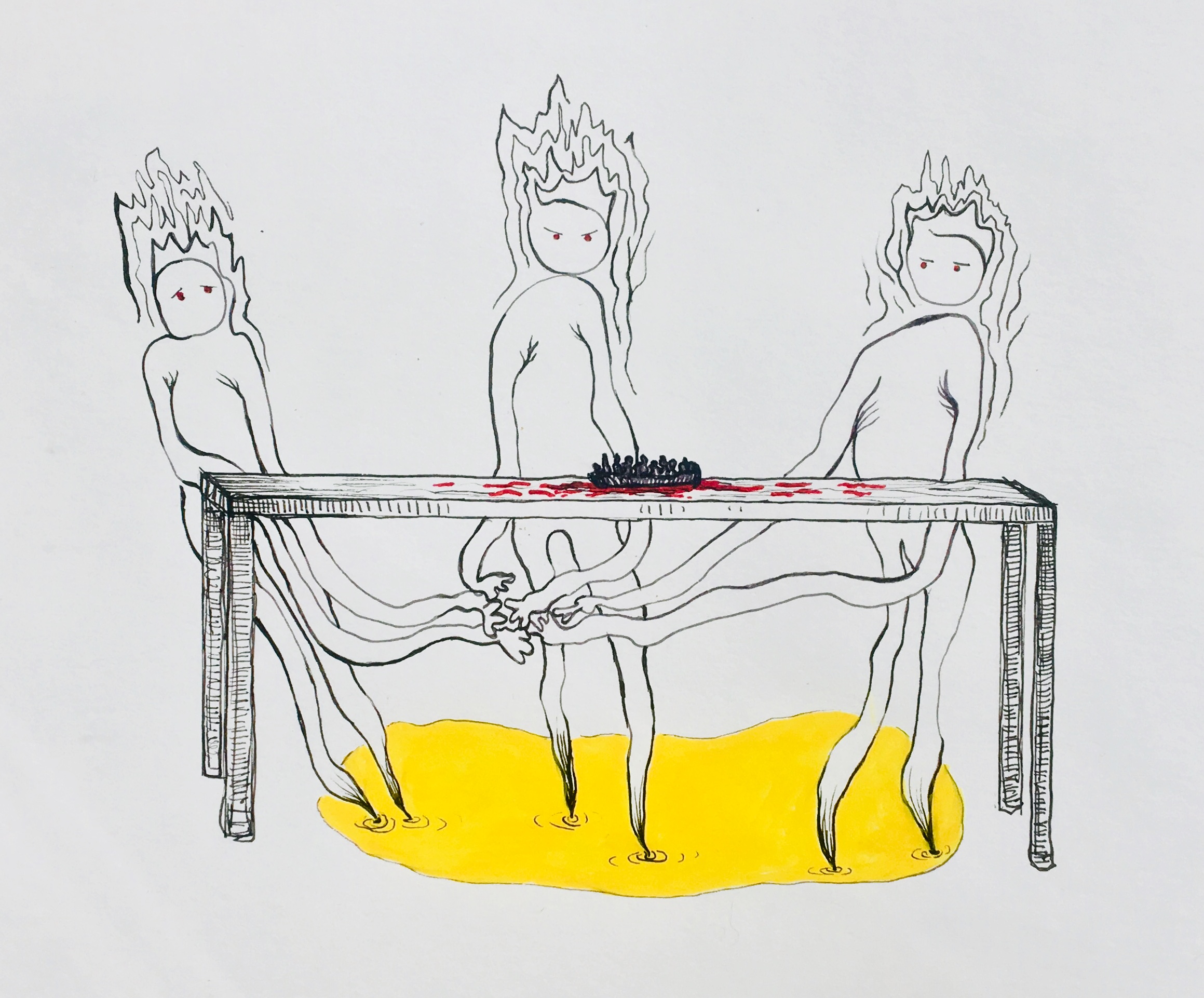 Illustration explained by the author Joana Maria Neves: The illustration portrays the illegal agreements being made by Malta, Italy and Libya, whilst on surface is a little boat, with blood around, representing those who risk their life crossing the Mediterranean. The three crowned figures stand together in the act of literally meddling with people’s life “under the table”. They see themselves as ‘kings’ of the situation, using their power to trade on secret illegal arrangements, their childish hands colluding against the lives of the one who tries to flee. Their common ground (used as a common excuse) is what they can stand on to shift away the attention of the world – Covid-19: a big yellow splatter catching immediately the eye of the viewer. They dip their toes in it, like little children trying to exclude themselves from the responsibility of their actions.

During Easter week, almost 1,000 people attempted to escape from Libya by sea. Half of them were found and pushed back by Libyan militias; the other half were left to their fate by the European authorities. After rescuing more than 150 people, the German ship Aylan Kurdi was made to wait more than 10 days for a port where survivors could disembark.

On the night of Easter Sunday, the humanitarian ship Aita Mari arrived in the waters of the central Mediterranean, heading back to her home port in Spain. Despite sailing with a minimal crew and no rescue team or doctors on board, the captain decided to respond to a mayday call which had inexplicably been ignored for six days. On the rubber boat, the sailors found a group of exhausted people, including two children and a pregnant woman, many in a semi-conscious state after a week at sea with no food or water. The nine sailors on the Basque ship, along with the survivors, would remain stranded in the waters between Malta and Lampedusa without permission to dock for one week, guilty of saving the lives of 43 human beings.

Italy and Malta closed their ports the week before the intervention of the Spanish vessel, justifying this measure with the ongoing Covid-19 health crisis. Between the two barricaded coasts hundreds of refugees were being left at the mercy of the waves.

To make the situation even more complex, on 9 April the Libyan authorities, faced with the simultaneous closure of European ports, implemented an unexpected plan of its own: for the first time, the government in Tripoli closed its own port, denying entry to its own patrol vessels. This was an unprecedented act, accompanied by an unusual – and suspicious – inability of the so-called Libyan coastguard to intercept the refugee boats at its maritime border.

Since 2017, European governments have been funding and training militias supporting the al-Sarraj government. The objective is to see these militias recognised by the International Maritime Organisation as part of the Libyan coastguard, in order to legitimise Libyan authorities’ illegal refoulement of fleeing refugees at sea. On 11 April, with ports closed and patrol boats inactive, the Libyan authorities declared that, “forced to face the attacks of General Haftar’s army, the current resources do not allow to also control the departure of the boats of migrants” – a clear suggestion to the EU to increase funding destined for the Tripoli militias.

On the same day the refugees rescued by Aita Mari left the coast of Tripolitania, a second boat also departed. On 10 April a Frontex aircraft spotted the dinghy with about 60 people on board. Malta, Italy and other relevant European actors in the central Med were informed of the case and of its vital state of emergency. But – in open violation of the international law of the sea – no coordination and no intervention followed.

These shipwrecked people had been at sea for a week before the Maltese authorities finally, on the night of 14 April, launched the alert via Navtex. The rescue was initially assigned to the merchant ship Ivan, but due to two-metre waves and the ship’s high freeboard, the rescue was not possible. Seven people died that night trying to reach the ship; their bodies disappeared into the sea. No statement was issued by any of the Maltese authorities responsible for the rescue mission. Moreover, despite the rescue not taking place, the alert released by La Valletta disappeared from the SAR communications that same night.

What happened to the 60 castaways? Not even the Italian authorities seem to be aware of their fate as they launched several aerial reconnaissance missions in vain. On Tuesday evening, Malta declared there are no open cases in the SAR area under their responsibility, without providing any information on the fate of the sixty refugees on the missing dinghy.

The United Nations High Commissioner for Refugees (UNHCR) will later report that 51 shipwrecked people were taken to Tripoli, along with five dead bodies. The survivors, including a little girl not even one year old, waited more than 12 hours on the dock of the closed port of Tripoli, exhausted, before being transferred to a detention centre. Colonel Abdelsamad, head of operation of the so-called Libyan coastguard, later publicly confirmed that the illegal pullback was coordinated by Malta.

On the very same day, the Maltese Ministry of Foreign Affairs called on the European Union to provide Libya with extra funding of €100m (£88m). “Today, not tomorrow,” he solicited, as well as advocating for more resources to the Libyan coastguard “to enable border control activities and ensure that Tripoli can be declared a safe haven for migrants to disembark”.

This proposal, in the midst of the biggest health crisis in living memory, suggests a tacit agreement with the Tripoli authorities, who are suddenly – and with suspicious timing – showing their inability both to contain the migratory flow and to control their main port.

The outbreak of Covid-19 has become yet another excuse to normalise the non-assistance of people in distress at sea, closing the borders and, once again, turning our backs on the invisible fugitives of the central Mediterranean. But now it is also the perfect ground for Tripoli’s blackmail of Europe: the threat of an uncontrolled flow of people across the Mediterranean is being used to finance their own personal interests – namely the civil war against General Haftar; a lesson well learned by Erdogan, whose ships and drones now patrol the Libyan coast west of Tripoli.

On the pretext of this health crisis, the European authorities continue to fail their legal – and moral – obligation to save lives. Yet, despite any pandemic, the victims of the Libyan conflict continue to flee to Europe in search of their most basic human rights, their lives becoming the sacrificial pawns of the cruel blackmail from Tripoli.

This article was first published on The Independent, on April 22, 2020.