Remembering the Future: A Blog Series by Kurda Yar

My name is Kurda Yar, a contributor to the Brush&Bow website. I work for a charity supporting women from asylum seeking and refugee backgrounds. I am also affiliated with the University of Bristol, Centre for Gender and Violence Research and I am a self-taught artist.

In a series of blogs entitled ‘Remembering the Future’ that will be posted every month starting from June this year, I will give an account of my experiences as a woman who grew up in a country at war and had to search for sanctuary in another continent. Remembering the Future presents the link between past, present and the future; the life, and cycle of thinking. Peoples dreams and aspirations when they are young are all about what they want to be in the future. When we reach adulthood, which is our present time of thinking, we spend a lot of time about how our childhood was, and the memories associated with it. For example, we remember how we imagined our future, and we reflect on to what degree our dreams of the future have been realised.

The blogs will reflect on some specific periods of my life which might not necessarily be presented chronologically. The first blog, however, starts in 1999, the year I fled from my homeland Kurdistan to Europe. Unfolding my displacement journeys from Mesopotamian to Nordic counties is another story for itself which because of space, I leave it here for now. 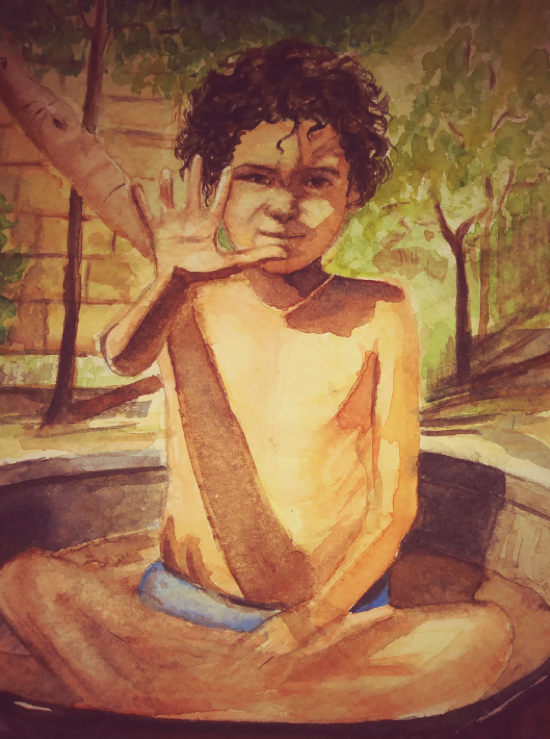 My first watercolour painting attempt since I was 11. I asked my brother who was the last to be left in Kurdistan to send me my photo album. When I look at this picture, the summer heat of that July in 1980-1981 still hits my skin. Two of my older brothers carried me surprisingly and while I was resisting, they put me in a giant container then poured buckets of water on me. Then one of them brought the camera to snap a photo and I instantly raised my hand asking them to stop taking my picture naked.

As the youngest of eight children, I was the seventh who was also forced to leave my homeland for good due to the several decades of war and internal conflicts that plagued my part of the greater Kurdistan – Iraqi Kurdistan. When I finished my AB in English in 1996, I worked in different international organisations for three years which amidst the scarcity of well-paid labour and fiscal turbulence in the region gave me financial and employment stability.

However, these two essentials did not necessarily give me any sense of security, which is the main element for having a safe and sustainable life in any place in the world. This, and after encountering some safety issues related to the sensitivity of my work interviewing ex-prisoners of wars and families of abducted and detained individuals and children, I had to make the greatest decision of my life – to make the journey alone to Europe. 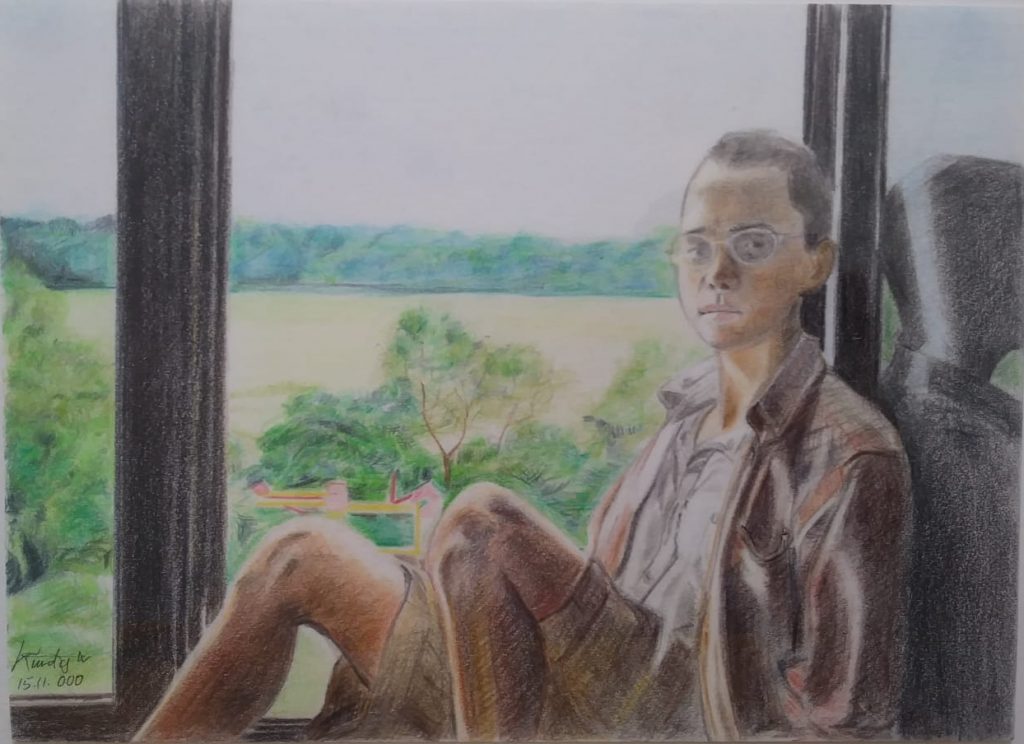 Colour pencils, (January 2000) a resident of Avnstrup camp – sitting on the window still in his shared room

While waiting to be granted sanctuary in Denmark, I spent more than one and half years in their asylum-seekers’ camps across Sjælland region before I was granted refugee status in June 2001. There I embarked on reviving my far-too-long snoozed artistic skills. To endure the painful waiting, not knowing what the future would hold, and the psychological effect the uncertainty had, I started drawing and painting again.

At that time in my life, nothing was in my control. My future, my identity and my entire being as a young woman full of hope, aspirations and ambitions had been reduced to a case number kept filed in a ministerial drawer. My fate was again on hold in a ‘checking point’ waiting to be judged whether or not my case is going to tick enough (in)eligibility) boxes to fail or pass the country’s decrees. The only things that remained in my control were my drawing pencils and papers and my very own imagination of a life full of love, piece and beauty. To my surprise, in my art pieces it turned out that I was much more capable technically than I thought. Amidst all the ugliness and hostilities that the asylum-seeking processes held, I tried to create a sanctuary for my soul and mind asserting that “La Vie est Belle”. I learned I could create beautiful objects despite the atrociousness!

My aim in sharing these blogs with you readers is to give insight into and a personal account of my displacement journeys. I will also be presenting my artwork alongside the stories associated with them, to reflect upon various issues which many refugees encounter in their diasporic countries as well as in their transnational cyber-belongings.

The blog will also touch upon concerns of a universal character including human rights, migration, refugees, the environment, etc. Immigrants and the refugee crises in particular have recently been a hot debate on the global stage and thus a tool for politicians to hook and win voters during the elections. As an insider within the refugee crises– fleeing from my homeland, going through the asylum processes in a European country, later granted refugee status and then labelled as a minority ethnic woman, my writings will touch upon how these diverse processes can create, transform, infiltrate or annul our different identities. Alongside these narrations many questions may arise for readers and may be worth further discussion and reflection, so any feedback and comments are welcome. 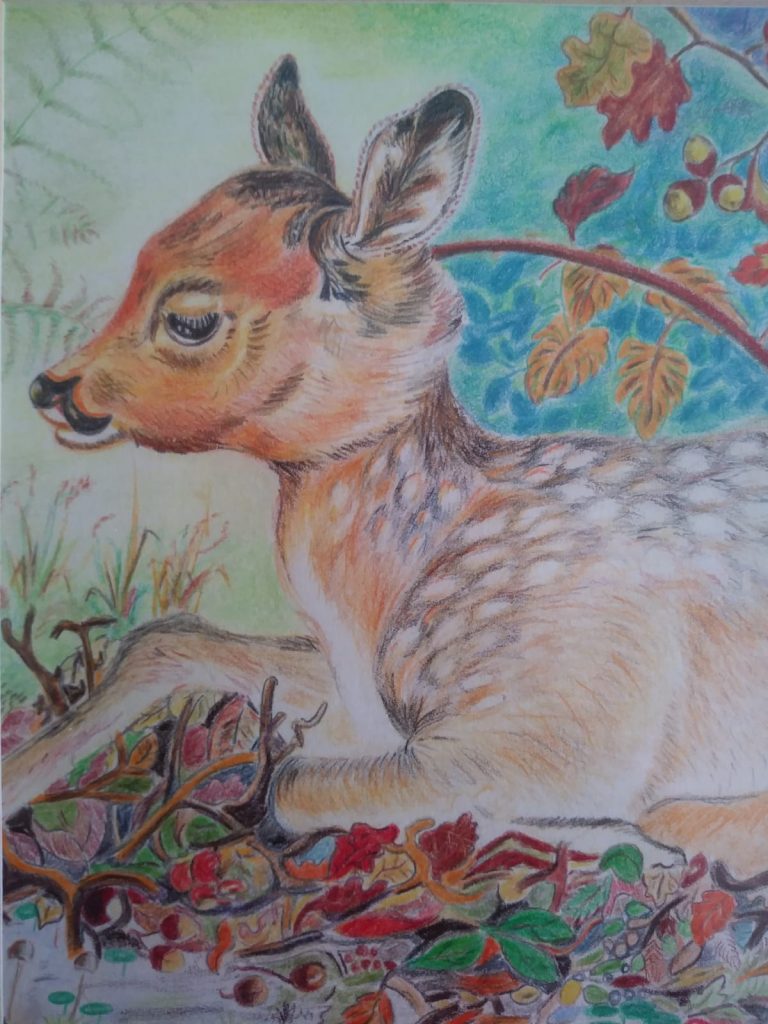