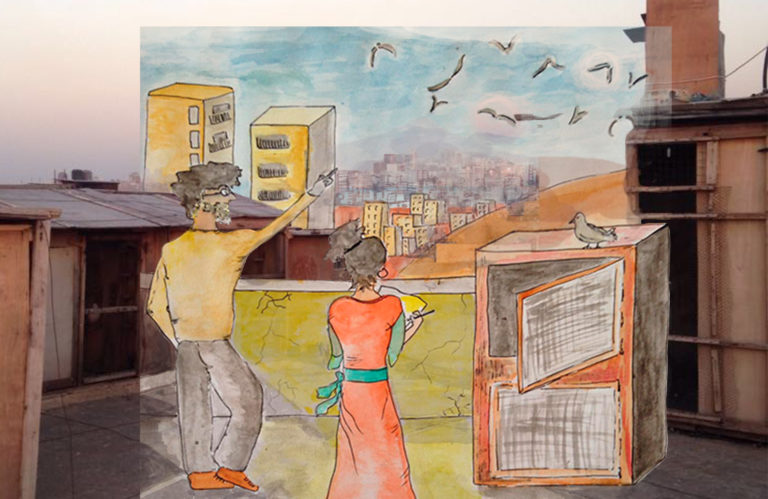 Common to many North African and Middle Eastern cities, pigeon fancying is one of the most popular hobbies in Tripoli, Lebanon’s second largest city. Sunrise and sunset is when you will notice them the most, as ear-piercing whistles fill the air and flocks of pigeons circle the skies.

We walk up to Hassan’s house, the cousin of a friend. “He’ll be glad to show you his pigeons”, we had been told. Hassan smiled a warm “ahlan wa sahlan” behind thick glasses. We climb up flights of narrow steps until we reach the roof of his building, in the heart of Zahriyeh, one of Tripoli’s oldest neighbourhoods. Here, since he was 14, Hassan comes to train his pigeon every second he is not working. “Maybe this is why I’m still unmarried” he laughs while pointing at a dozen big wooden cages fixed on pallets. “Would I be allowed to keep them if I had a wife?” Hasan learned to train pigeons from his parent’s balcony, a couple of stories below. When his uncle migrated to Saudi Arabia for work, he put Hassan in charge of his pigeons – and of his own reputation as the “khashash hamam” (pigeon racer) of the neighbourhood.

From Hasan’s rooftop you can see the city sprawled below, the older city’s haphazard buildings dwarfed by the tower blocks built in the 1970’s as the city spread out toward the sea. Pointing at the bullet pockmarked wall of the neighbouring building, Hassan tells us how even during the the war he still flew his pigeons.

Hasan wastes no more time talking politics and starts showing us the real deal: “I know you Europeans despise pigeons. You think they are dirty animals, like rats! Here instead we value them over any other animal, for their beauty, their intelligence and loyalty.” He walks us around the heavy wooden boxes built on the roof, opening cage after cage packed with pigeons. The variety is incredible. He shows us some with long necks, some with short, with curved or straight beaks, feathers on the tail, feathers on the head, feathers on the feet. “We breed pigeons either for racing or for beauty” he explains, “depending on why you want to fly them”. Compositions of different coloured pigeons is highly esteemed when flying pigeon flocks, balancing blacks and whites, reds and greys. Some pigeons also have bells tied to their legs, or earrings with colourful beads pinned to their feathers. “But the most exciting aspect of pigeon-fancying is racing of course.”

Hasan opens a cage and whistles three short sharp notes, as the pigeons come flying out. Racing pigeons happens nearly every evening, when fanciers let out their pigeons at the same time. The pigeon fanciers decide to let out a selected few in specific groups, often mixing male and female, males to set the direction and females to attract pigeons from other flocks. Once high in the sky, pigeons from different flocks mix together flying high above the city. The game lies in calling pigeons back to your roof while they are flying together. “You have to whistle your pigeons back to your rooftop and try to tempt new pigeons to join them. All newly caught pigeons become yours! But you have to be careful that your pigeons do not go off with another flock as well.”

“During the clashes between Bab Al-Tabbaneh and Jabal Mohsen we would still fly our pigeons”. He points eastwards, toward the poorest part of the city where the Sunni and Alawite neighbourhoods live in a grudging peace after years of clashes. “We would race against the pigeons of those we were fighting, but in the skies we were surely better friends than on the ground”. He paused, “I don’t think I’ve spoken to any Alawite after the clashes…and I used to have so many friends up there.”

We watch as Hasan’s pigeons fly lower and lower in concentric circles around our rooftop. “But this is also why it’s good to keep on racing with them”, Hassan adds, smiling again. “If you win, you win good pigeons for their pigeons are surely better than ours.” Sensing our confusion Hassan quickly explains. “As Alawites they can trade with Syria at better prices, and access more variety. The pigeons you find in Bab Al-Tabbaneh are the ones that have not been bought in Jabal Mohsen, the scraps.” Pigeons found at Tripoli’s markets are mostly from Syria. Despite the war, Lebanon has no other alternatives than to go through Syria when it comes to overland trade. Birds from there are tricky to train, especially if they have been racing in Syria before. “You know what the greatest risk is when dealing with ‘hamam shami’ (Syrian pigeons)? That they’ll fly back as soon as they are released, and take with them all your other pigeons too! Even after one year, pigeons can remember where their former home is, and they will find it with extreme precision, if it’s still standing”.

All of Hasan pigeons are now back in their cages. The evening’s call to prayer accompanies the sun’s descent into the sea. Hassan finally resolves to offer us tea. “How do pigeons die?” is our last, naïve question. The answer brings us back to politics. “Pigeons die like presidents. Either young, because they’ve gone too fast and crashed, or old, because they are careful flyers, and take good care of being close and loyal to their home”.