Mama Yosepha – “I speak up and fight” Activism in West Papua 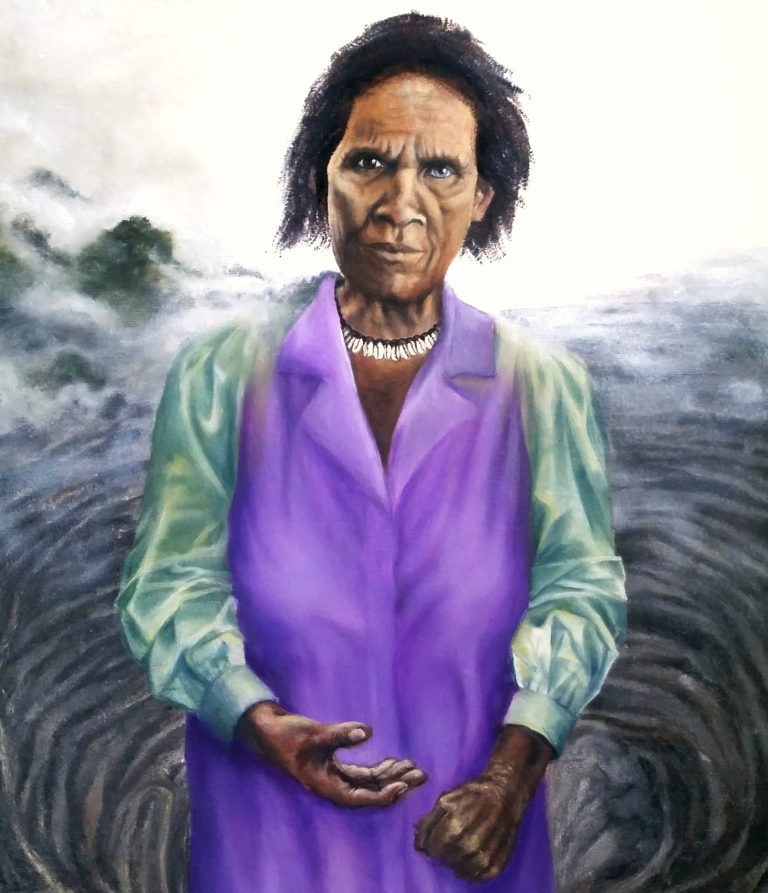 “I work hard to defend myself and fight against violence towards women and other victims of men or outsiders in military uniforms or from the civil government or Freeport. Whoever they are. I speak up and fight.”

Mama Yosepha Alomang organised resistance to the world’s largest mining operation. Fighting against all odds and despite physical and emotional torture inflicted on her and her people, this 78-years-old West Papuan matriarch is a living symbol of resistance to colonial, corporate, racial and patriarchal oppressions.

Ecocide and genocide in West Papua

When it comes to biodiversity and natural resources, West Papua is one of the richest regions on the planet. Yet its population is among the poorest. Formerly a Dutch colony, this little-known Asian province located on the Western half of New-Guinea has been brutally occupied by Indonesia for the past 60 years.

Strong ties bind Indonesia and Freeport, the company that now manages the Grasberg mine – the biggest gold and copper mine in the world. In the early 1960s, West Papua was getting ready for independence from the Dutch, but a secret ore exploration agreement was signed between the company and an Indonesian army general. In the following months Indonesia declared war on the Netherlands. The Cold War was raging and United Nations and the United States got involved to hand over interim control of the nation to Indonesia. But the act of self-determination promised to the West Papuan people at that time never happened and, facilitated by the UN’s complacency, the province become a military zone. A genocide and an ecocide started.

Maintained in the shadow of these political manoeuvres, the West Papuan people endured horrors. The military is said to have caused the death of 500,000 and human rights abuses are still rife across the territory today.

‘I speak up and fight’

Mama Yosepha is Amungme, the mine is located on her people’s land. Despite hardships and multiple forced relocations, she devoted her life to dismantling all the oppressions she faced.

Orphaned as a baby under Dutch rule, her childhood years were difficult and unstable. Her first political act emerged from her husband’s alcoholism and the abuse she and her baby endured. Alcohol was introduced into her community by the Indonesian military and Freeport, she believed, to destroy Papuan families like hers and she campaigned to make it illegal in her region.

A few years later, in a disproportionate backlash for a few Amungme damaging one of the mine’s pipeline, a violent Indonesian military operation forced her and her six children to seek refuge in the forest again. They escaped a massacre but the youngest, aged 4, died from starvation as a result.

Mama Yosepha assumed an increasingly proactive role as a community organiser. The mine was taking everything away from them and left her people impoverished. She set up a fruit and vegetable cooperative and asked Freeport to buy from it instead of importing goods. Facing multiple refusals, she organised a protest on the local airfield. For three days, Amugme people lit fires and prevented planes from landing, thus forcing Freeport to invest in the community.

Her resistance inspired Papuans. Gradually considered an opponent to the colonial rule, she was arrested by the Indonesian military on suspicion of providing goods to an independence leader.

They tortured her. She was locked for a month in the army’s septic tank, knees-deep in human faeces.

This dehumanising repressive method was common and as soon as she got out, she helped free other prisoners and built a case to sue Freeport for personal injuries and environmental degradation.

At the same time, within her community, she also combated the deeply patriarchal customs and traditions of her tribe, a system of values known as adat. Because of adat, she had no say in the male-dominated local human rights organisation. With the money of the Yap Tham Hien human rights prize she was awarded in 1999, she set up her own organisation, Yahamak – the Foundation Against Violence and for Human Rights. She still to this day calls for the closure of the mine and independence for West Papua.