#4 The first time I realised I didn’t exist!

Written and Illustrated by Kurda Yar

I was a dedicated volunteer in Avnstrup camp involved in many activities. A great advantage of this dedication was that I could improve my living conditions. I moved from a 3 bunkbed (6-person) to a room with 2 single beds. It was much easier having to cope with only one roommate rather than five other personalities after a long studying and working day.

During my year long stay in this room, I lived with two other women asylum seekers. One of them was a gynaecologist, an Iraqi Christian from Baghdad in her late 50s or early 60s. She was a nice and calm woman, but she was going through very difficult times.

She had various ailments and felt unwell, often crying and wailing for her children. She was constantly on the phone with her family. Her husband and son got arrested in Germany on route to Denmark. I don’t remember where her daughter was, I think she was still in Iraq.

I often consoled and comforted her, treating her like my mother, and offering her tea and food. She told me I reminded her of her daughter, and often gave me advice and tips about health and nutrition. She introduced me to eating raw broccoli in salads rather than boiling it, to keep the nutritious property in it 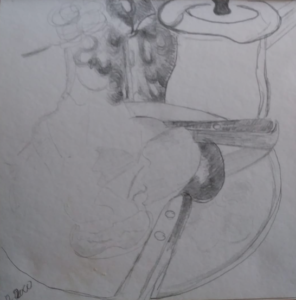 Once I asked her whether she was Chaldean or Assyrian Christian, she said no, she was originally an Armenian Christian. Her family were displaced to Baghdad from Turkey. They were survivors of the Armenian massacre carried out by the newly established Turkish state in the aftermath of the collapse of the Ottomans Empire in the early 1920s. 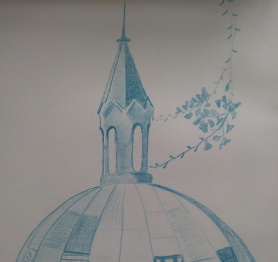 Roof of a building (2001) seen from Ørstedsparken, the park I was visiting daily for my lunch break from Danish sessions

The other woman I lived with was an Iranian in her mid 30s (I call her D to protect her identity). She was a very hard working, smart and independent women. She held a PhD in pharmacy and in no time she joined a research laboratory at the university in Copenhagen. When describing her extensive proficiency in her subject she would say “I can close my eyes and make medicine”. Her employers were very impressed by her skills and knowledge and they offered her a job. They tried to employ her by liaising with the Danish Ministry of Immigration, but they refused this request, because asylum seekers were and are still not allowed to work in Denmark.

D and I developed a very good friendship. We often went for walks in the forest, talking about our childhood, family and our homeland. We also had a lot of fun time together. Once she gave me a bike ride in the camp’s car park and we wobbled and were nearly about to fall and have an accident. We got told off by a driver! D loved my cooking and we would often eat together. Her cooking was very simple with very limited variations. She enjoyed my Kurdish table especially my various stuffed vine leaves recipes. 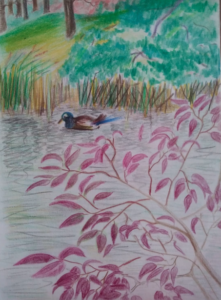 Ørstedsparken’s lake, colour pencils (2000) The park I was visiting daily for my lunch break from Danish sessions

As a pharmacist, D had extensive knowledge of nutrition and of course medicine.  She had particular night and morning routines. Before going to bed she would put one almond on her side lamp table next to her alarm clock so that she doesn’t forget to take it first thing in the morning. “This is my morning pill” She would say.

I said “Oh, I also love almonds and we also use it a lot in cooking, but we do not eat it for breakfast. Instead we eat walnuts with honey, bread and black tea in the morning. It is our famous Kurdish breakfast back home. “

She told me “You know I am a pharmacist and I have studied chemistry for money years. Most medicines are extracted from plants. Almond is the only nut that contain special proteins which are very vital for the brain. The brain cells have a very special shape. Do you know how they look like?”

I said “Yes, I remember. I loved my biology subjects. I enjoyed doing my homework, in particular the drawing and colouring of biology book illustrations. Yes, the brain cells have branches like a tree shape and with a long tale.”

She replied “Exactly, the brain cells are the only cells in our body that they do not multiply or renew so meaning you have them for your lifetime. If they are damaged or lost, they can’t be in replaced (researchers reject this theory now), so we have to really look after them. Almonds contain a special protein which helps repair brain cells and thus improving the cognitive functions including the memory.”

Since this epic lecture about almonds and the brain cells, I have been eating almonds regularly, yet not as a pill in the morning though! 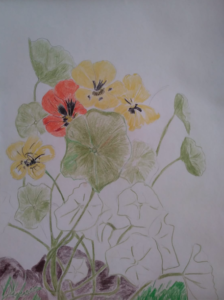 Nasturtiums, Colour pencils (2000) copy of an image from a botanic flower book

Because she was commuting daily to Copenhagen, she managed to move to a camp there. After a few months D told me that her roommate had moved out. I was already commuting regularly to Copenhagen for my Danish classes. Finally, I was reunited with D.

The new camp was much smaller and located in Amager East of Copenhagen; it was an abandoned old small care home which needed renovation.  There was a small kitchen with two electric cookers for total of eight two-single beds rooms -17 people in total.

There were often tensions in the kitchen. Once a conflict happened between two men – an Iranian Kurd who usually helped his wife in the kitchen and an Iraqi Arab Shia man from Iran. The Iraqi man was angry shouting at the Iranian Kurd that he doesn’t want him to be in the kitchen while his wife was cooking. He said the kitchen is women’s work men are not allowed to be there. The Kurdish man replied that the kitchen is for anyone to use and he would like to cook with his wife, and he shouldn’t interfere. 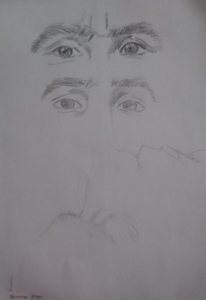 I noticed that D had changed. She became quite secretive and would run outside the room to answer her telephone calls. One day she asked me whether I understood Farsi or not. I said I didn’t understand but I wished I could. I love Persian music and literature. There are some similar words to Kurdish, but I wouldn’t be able to understand a conversation or read a book. She said that The Iraqi Shii man told her that all Kurds understand and speak Farsi. I told her that it is not true, Kurds in Iran speak farsi because they are ruled by the Iranian government. Likewise, I speak Arabic because we are ruled by the Arabs in Iraq. The same is true for the Kurds in Turkey who are even not allowed to speak Kurdish or listen to Kurdish music. I said “Do you know Kurdistan has been divided between four countries in the 1920 under the British and French mandate after the collapse of the Ottoman Empire ……. ”

She interrupted me. “There is no such a thing as Kurdistan. Kurdistan is a province in Western Iran and if you say to people in Iran you are not Persian but Kurdish from Kurdistan, they would laugh at you. Kurdish is a dialect of Farsi.”

Looking at her I was shocked, speechless not knowing how to find words to carry on the conversation. I was literally standing in front of my best mate telling me that I did not existit. She was simply quashing the existence of 40-50 million Kurdish people in the middle East- our entire being, identity, history, language, literature and cultural heritage. Unconsciously I became defensive:

I said “No… no… D …Kurdish language is not a dialect of Farsi. It is true we share the same family language which is called Urdu-European, but we have our own history, culture and language. We have our specific Kurdish traditional clothes which my mum used to wear that no Arabs, Turks or Persians wear. I didn’t know there is a province in Iran called Kurdistan, but greater Kurdistan spans over all the areas where the Kurds have always lived. It is true we have many Kurdish dialects, but we are all Kurds. No…no ….. I think you know very little about the history of your own country. If you do not believe me, go and do your own research. You can google it. By the way, if you are so sure that all Kurds speak Farsi, why we never managed to communicate in Farsi? “

While staring at me she replied “I don’t know….”

I was deeply hurt and disappointed. Not only because seemingly I lost my best friend, but also that D trusted a controlling misogynist man who placed women in the kitchen and not myself who had lived with her for long months and was now accusing me of not being truthful and totally dismissing my Kurdish identity. 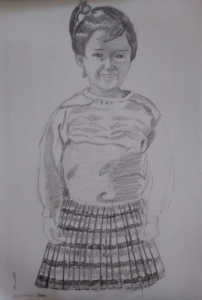 Graphic Sketches of Bru, my niece (2000) when she was 4 years old in Sarchnar park in Slemani-Northren Iraq

D was not alone in this denial of the Kurds and Kurdistan. It became apparent to me that it is a prevalent attitude held by many countries bordering Iraq, in particular Turkey. For example, a Kurdish friend’s children were confronted by a Turkish afterschool worker in Copenhagen who asked them where they were from. The children said from Kurdistan. He took the kids to a wall world map asking them to show him the map of Kurdistan and of course they couldn’t as it is not on the world map. The worker told them there is no such a thing as Kurds and Kurdistan, you can either be an Iraqi, Turkish, Syrian or Iranian. The children got very confused and upset and their parents complained about the worker to the school. Also, Turkish media presents Kurds as mountain people with a different Turkish dialect.

Later after some days D apologised to me about what happened saying that she was too busy in her life studying, travelling and living abroad. Therefore, she didn’t know so much about the history of Iran and the Kurds. However, she never answered her phones calls in the room.

One day D collapsed crying on her phone outside our room. The next day she packed up everything and disappeared totally. I guess she was refused asylum in Denmark, and usually a refused case from Iran automatically meant deportation. Deported asylum seekers to Iran usually face long time in prison, torture and/or capital punishment. 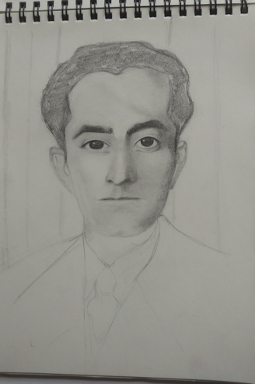