Winnie Linet is journalist, born and raised in Western Kenya. She worked in Lebanon for five years and in this four part series, explains why she left Kenya to work in Lebanon and her experience working under the expoitative Kerala system there. 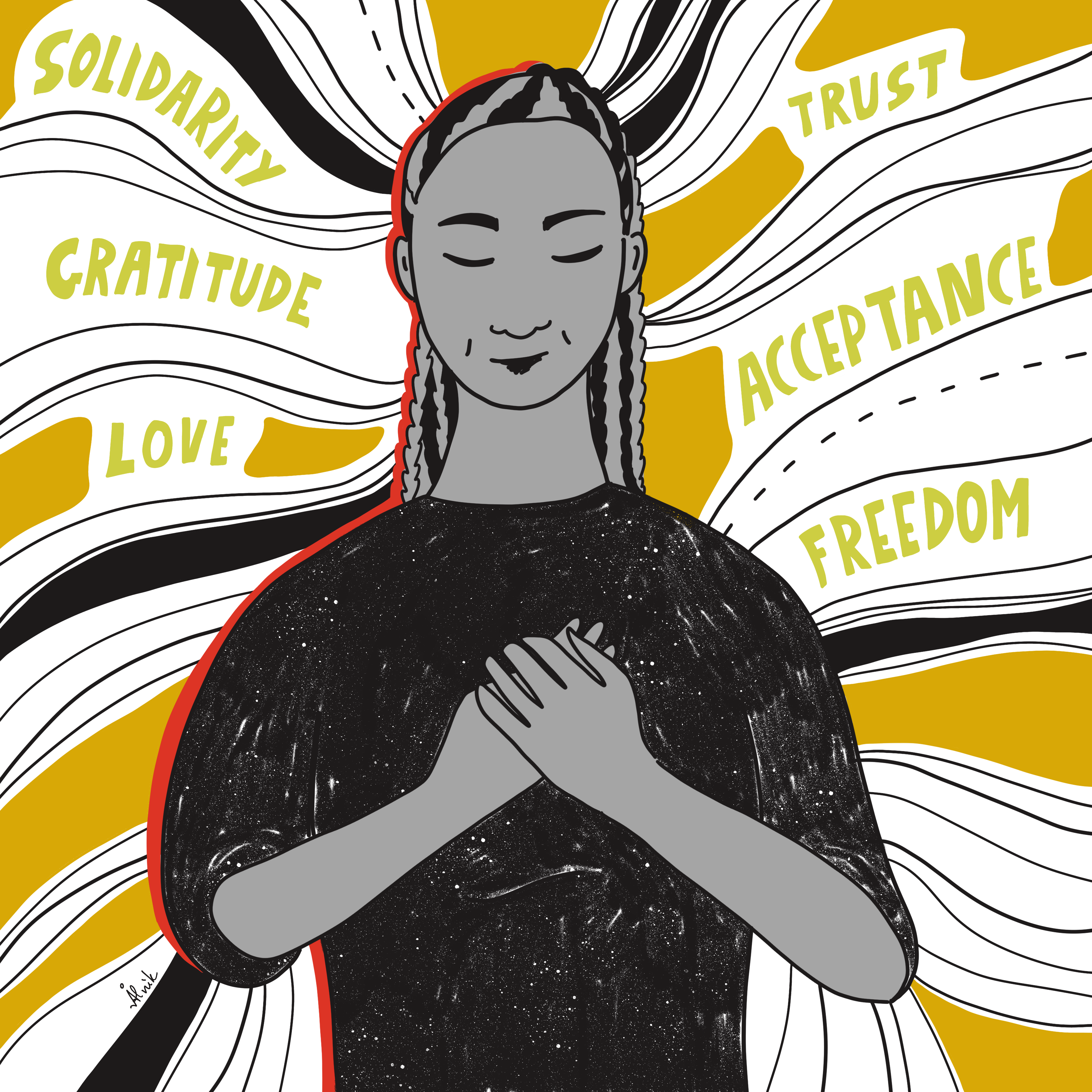 At the end of her journey, Winnie takes many gifts. She is coming back home with the feeling of appreciation of love, gratitude, trust, acceptance, solidarity, freedom and much more. The image depicts her in the moment of learning to really accept her path and adjust to what’s out there for us, learning from the roughness and taking home the good moments, lessons and feelings.

Having had the chance to write the three articles, this story is meant to conclude on my stay in Lebanon and give out my view concerning what could actually make a domestic worker contended and comfortable using my very own experiences. In a simpler manner it’s to shed light on exactly why they would choose to stay with their employers after the end of their contract voluntarily and not being pressured. I will explain some of the factors that contributed my five year stay in Lebanon and not two years as stipulated by the contract.

When I got to Lebanon reality dawned to me that I was no longer in my mother country and that alot would change. Starting with what I expected to do versus the new job. I realized that I had to accept. Acceptance was a major step on my part, I had to be ready at all costs. This actually may take time depending on the domestic worker especially one who didnt expect to getting that kind of job. It makes them to be emotionally prepared and be able to face whatever difficulty that may arise along the way. Having arrived, the warm welcome from my employer and them wanting to know how the whole journey was actually was a major step. I felt the brother to my employer struggle to speak English just to get to let me know that he has a family that composes of young ladies like me. I felt him trying to make me adjust to the new family setting in Lebanon. Having gotten to the house I felt prepared for and when I complained of the burning sensation on my face my employer disclosed to me the water had been treated and she apologized.

Adjusting to weather wasn’t easy.Since I came in during winter. I needed heavy clothing thankfully my employer provided. The first year wasn’t easy though since I had restrictions. For example, I had no day off to go outside. However, fortunately during the second year things started loosening up. I was even able to ignore the outside and focus on those who could understand me inclusive of the way people judged me. I felt a new connection with the people who were once strangers to me and they felt like family. Their ability to incorporate me like one of them despite the others not being open hearted to me made me stronger. The surety that they would rise to my defense incase a situation so uncomfortable arose was a contributing factor It was also during the same year that I got the permission to buy my own phone thus making it easier for me to be able to communicate with my family way back in Africa whenever I wanted irrespective of the time.

It’s also during the second year that I was granted permission to at least go out for 2 hours utmost three times a week that would supplement my off day that was to be on Sunday. I also got the chance to go and visit whomever I would want to visit and also friends coming to visit me after work. The family was able to trust me with going to the supermarket and groceries to get whatever necessities we needed in the house without having the feeling that I would disappear or be involved in any sort of mischief. The issue with having friends is actually one thing most families cant adjust. I chose to assume it as being conservative on their part but actually it’s not, it’s rather being mean. It’s the fear that one would speak out of what they are going through in whatever places they work. If an employer is being fair with their employees why would one fear them mingling with friends?

Whilst the course of work, freedom was given to me to eat whatever seemed suitable for me but not what was forced on me. I got the chance to be able to learn to cook other meals, exposure to new tastes that gave a comfortable environment to stay. This was a major adjustment in addition to being able to speak Arabic after one and half year stay in Lebanon. With all this I encouraged myself that it was possible to stay more years above all every time I managed to pass a year I discovered that my mind had new things I wanted to accomplish. I had come wanting to get my college fees as my major task but now on the list was changing the state of my home.

Life in a foreign country had become easier with me being able to hear and speak Arabic, adjust to seasons, have friends even though most left me behind because of the uncomfortable lives they lived. Having them meant twas easy to unload the emotional burden that I was going through especially when I felt lonely with no family around that was African. I felt they would understand and I could for them as well. I was able to move a year to another with hope of being abl to accomplish all the dreams I wanted especially to the young couple from London I met during my last year who encouraged me to hold on tight and that one day I will accomplish my dreams.

This actually are the major reasons why I chose to stay. The ability of the employer to understand that your employee is human and wants to be loved and appreciated really matters. She or he is your responsibility and needs to be loved and taken care of apart from the salary that should be paid on time, since they too have families to she needs to talk to and if denied chance it’s like torture to her. It’s important the environment be sustainable to the point of feeling her pain, encouraging even times when she is low for your family’s well being and that it’s only about you. Above all there is no need to force them to make decisions that can ruin their entire life. After all what goes around comes around. Be their protector and strength.

Finally I want to say this, women especially travelling to find work in Lebanon isn’t bad, infact it’s an act of courage to leave behind your loved ones to work abroad, all I advocate for is a conducive working environment for domestic workers. Everyone has a need to fulfill and let there be a sense of humanity not just in Lebanon but to this also the entire world. Let cruelity and mistreatment in relation to domestic workers stop, because we need one another. Racism based on colour should not be condoned at all nobody wants to be discriminated and looked down upon. All this young women travel to be able to support their families so do other Lebanese why then do they find it difficult to see domestic workers as humans? Speaking of their rights like an off day and salary why do you deprive them and expect loyalty. Some even are threatened and tortured can unstable mind function? Do to others what you want them to do to you. As for the Kenyan Embassy or other embassies in Lebanon, stand up for the rights of your people.In the five years I never saw any concern from my country leave alone it’s office it is such a shame to know that you all alone. I wish to urge all embassies to rise up to the aid of there people in countries where there is racism. Let’s be one another’s keeper. Every effort you make to help out someone in trouble counts, let’s turn out in large numbers to speak against vice, don’t ignore instead do something.