Fortress Europe: ‘Going back is not an option’

Stories from a refugee family trapped at the edge of ‘Fortress Europe’.

Photo by Matteo Trevisan: A group of migrant are going to the Game. Most of the time the migrants try to cross the border after the sunset. Bosnia, Bihac, December 2018

The sound of children playing echoes through the corridors of Hotel Rio Mare, a small building just outside the town of Bihac in north-western Bosnia. The hotel is usually empty at this time of year, but at the moment every room is occupied. Barefoot toddlers wobble their way along the corridors, completely immersed in imaginary adventures. Older kids chase each other, hiding behind pillars and doors, engrossed in a game of hide and seek.

By contrast the adults are quiet, their expressions sketched in shades of exhaustion and dread. A man with dark, sunken eyes and greying stubble sits slumped on a plastic chair, staring into space. From time to time he glances at his children playing close by, then sighs heavily and rubs his face with both hands.

All the guests at Rio Mare are refugees. Some have been walking for months, while others left home years ago, stopping in Turkey or Greece to find work and save up for the next leg of the journey. They come from Iran, Iraq, Syria, Somalia and Afghanistan, and they are among the thousands of people currently stuck in Bosnia. 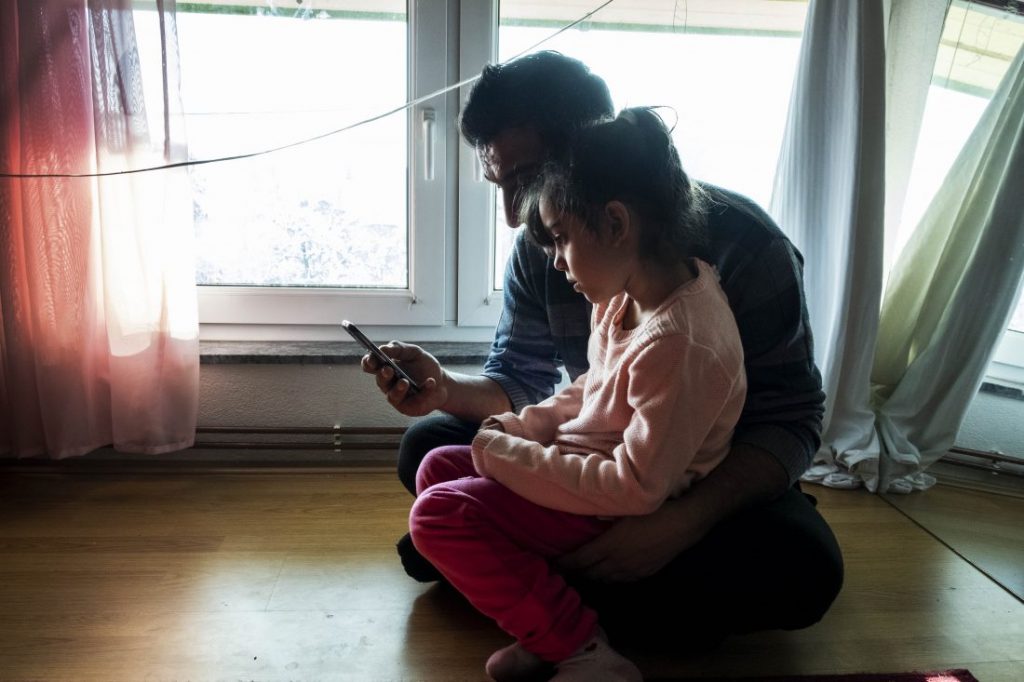 Photo by Matteo Trevisan. Father and daughter Hussein and Rimas sit inside the Rio Mare Hotel, looking at photos of family and friends in Iran.

During the height of the so-called ‘migrant crisis’ in 2015, refugees passed through Macedonia and Serbia and crossed into EU member states Hungary and Croatia. But Serbia’s borders have since been fenced off and closed, forcing refugees to reroute to the south. This has meant a surge in the number of people passing through Bosnia: more than 24,000 people were recorded in 2018 compared with 755 in 2017.

In one of Rio Mare’s small rooms, six year old Rimas is getting ready to go out. Dressed head to toe in pink she pulls a wooly hat over her eyes, twirls around, and collapses in fits of giggles as she trips over shoes and bangs into furniture. Her father Hussein rolls his eyes and smiles then helps his little girl into her pink puffa jacket, before taking her by the hand and leading her outside.

Rimas and Hussein are joined by Nassima, Rimas’s mother, and Lamia, Hussein’s younger sister. They plan to walk a short distance to Bira, an abandoned factory where they will queue with hundreds of other people for some thick slices of bread, a lump of butter, some jam, and a glass of milk distributed by volunteers from the Red Cross. 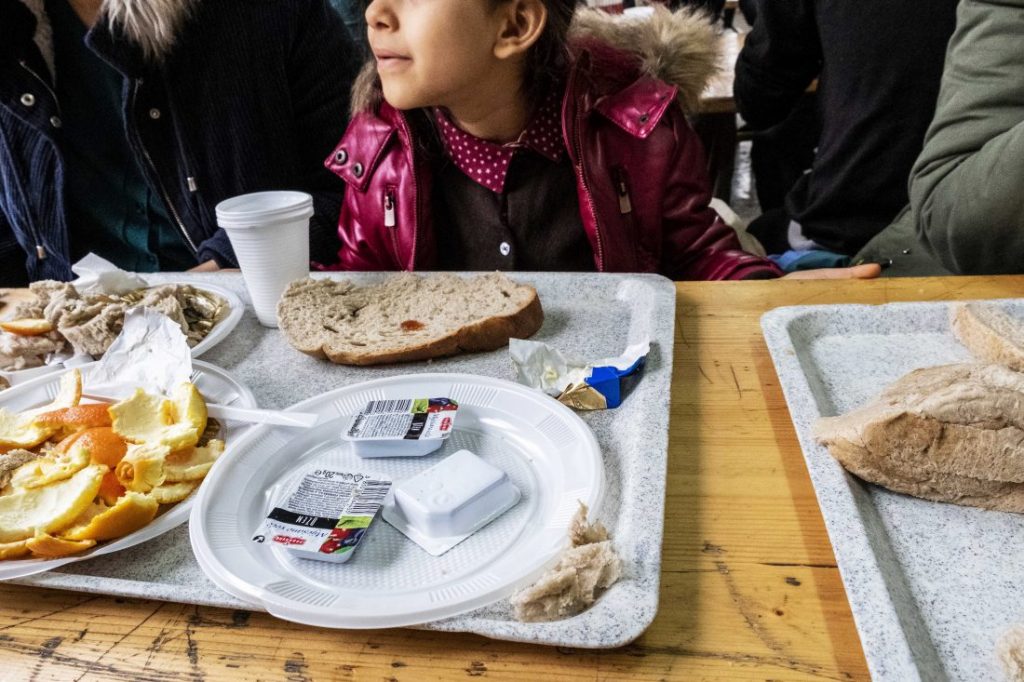 Photo by Matteo Trevisan. Rimas with food given out by the Red Cross. Sometimes refugees in Bihac have to wait hours to eat.

Hussein, Rimas, Nassima and Lamia are from Iran and are trying to get to Germany, where they hope to find safety and a chance of a decent life. “We never thought it would be this hard”, says Nassima. The family of four has been on the move for four months. They’ve walked from Iran, crossing into Turkey, then Greece, and finally through the southern Balkans to Bosnia. But they are afraid that in this little town on the border with Croatia they may finally have reached a dead end.

Going back is not an option. The family are Ahwazi Arabs, an ethnic minority which has long been persecuted by Iranian authorities. “The people of Iran are very good”, says Hussein, “but the supreme leader is bad. We cannot live there”. Sitting on the edge of his bed Hussein scrolls through his phone, showing us photos of people kneeling on the floor, hands tied behind their back. “See, they arrest Ahwazi people.” He goes on to name a long list of relatives and friends who he says have been executed by the regime. “We speak Arabic, and we are Sunni”, chimes in Nassima, “so we are not accepted. We can’t get jobs and we are not free”.

This isn’t the first time the family has tried to leave Iran: back in 2003 they moved to Syria, where their great grandfathers had hailed from. They settled in, and both Hussein and Nassima obtained university degrees in business and management. Just as they felt secure enough to start a family, the war which has ravaged Syria for the past eight years broke out and they were forced to return to Ahvaz, in Iran. Rimas was born there in 2013.

“But we could not stay there”, says Hussein, “it was too dangerous”. Lamia worked as a hairdresser, but neither Nassima nor Hussein could find jobs, and they were afraid that their daughter would not have the bright future they wanted for her. So they started walking, certain that an EU country would grant them asylum.

Driven by their hope, the family struggled through what they thought would be the last stretch of their journey. Crossing the border from Bosnia into Croatia also meant crossing into the EU, where they had the legal right to request asylum.Soon it was going to be over, thought Hussein, and they would start living again. The family hiked through the forest, sleeping rough and keeping themselves warm by lighting campfires. “We pretended it was a game”, says Nassima, “but it was very difficult for Rimas, very difficult”.

After crossing the border into Croatia they went straight to a police station to request asylum. But they were never asked questions, or given forms to fill out. Instead the police drove them to a secluded spot and searched them, emptying their bags on the soaking wet ground and breaking their phones. The policemen demanded money and when Hussein refused to hand it over they kicked him to the floor and hit him over and over again, robbing him of 1000 euros. “The police beat me with sticks right in front of Rimas”, says Hussein, shaking his head in disbelief. “It was very bad.”

The family was physically pushed back across the border to Bosnia. Lost, without money or phones, they walked for days until they finally reached a small town, where locals offered food and warm clothes. When they reached Bihac a few days later, they met dozens of families from Syria, Iraq, Afghanistan and Palestine. Some had been in Rio Mare for months, and many had similar stories of violence along the Croatian border. 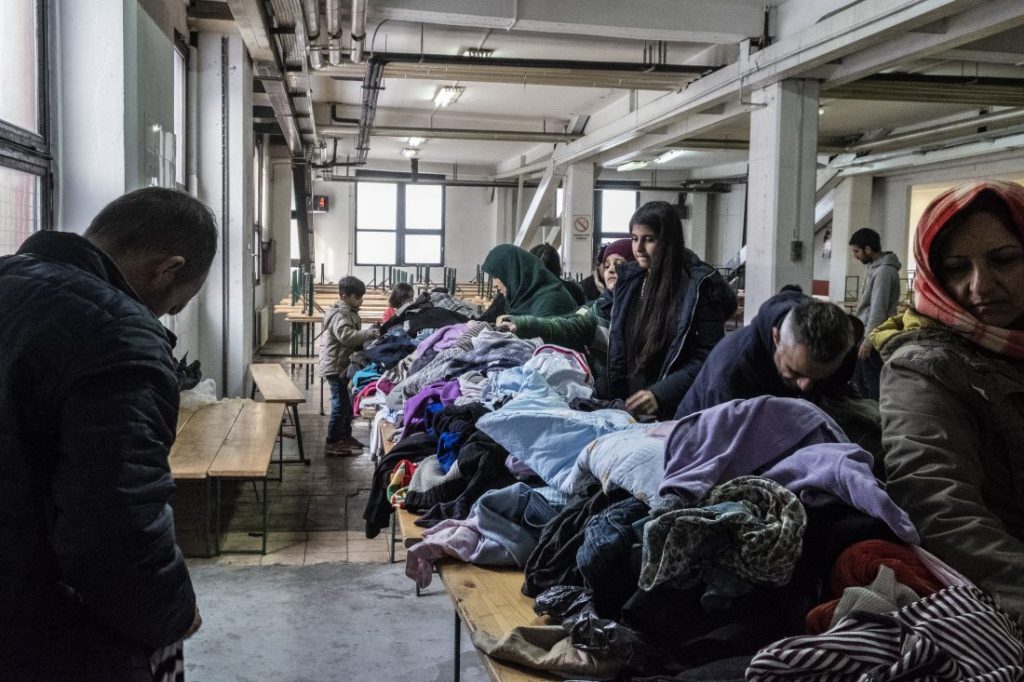 Photo by Matteo Trevisan. Clothes are distributed to families inside the Bira refugee camp.

Organisations such as Save the Children, Human Rights Watch, Amnesty international, and a coalition of grassroots NGOs such as No Name Kitchen have all detailed this widespread, systemic violence perpetrated by Croatian Police. “But this is not a problem of Croatia only, it’s a problem of the EU”, explains Karolina Augustova, a researcher and volunteer with No Name Kitchen. After all, the boundary between Croatia and Bosnia is also the EU’s outer border. With the rise of Populist Radical Right parties and their instrumentalisation of migration for domestic political objectives, keeping people out — no matter the cost — has become the central tenet of the EU’s migration policies.

“This is just how the EU deals with migration now”, says Augustova. “They know about the violence, of course, but little is being done.” Despite the reports of widespread, systemic violence, the European Commission recently awarded Croatia 6.8 million euros ‘to help reinforce border management at the EU’s external borders’.

Rimas, Hussein, Nassima, and Lamia are among the lucky few to have been allocated a small room in Rio Mare. The majority of refugees live massed together in Bira, an old, dark and decrepit factory, where there is little access to basic services like clean toilets and showers. “It’s dehumanising”, says Augustova about the conditions in the camp.

Back at Rio Mare, Hussein and his family try their best to make things fun for Rimas. They take her out to play in the snow, let her jump on the bed, and buy her a colouring book and pens. Despite her bright smile, her pranks, and her giggles, Hussein says she hasn’t forgotten that night in Croatia. “She is crying in her sleep, screaming”, he says.

The family has been hit by the realisation that Europe does not want them, but they are not giving up. They have no other option. In a few weeks’ time, they tell us, they will try again. Hussein is optimistic: “soon”, he says, grinning, “Rimas will be in school”.

*Some names in the article have been changed to protect the identity of people interviewed.

This article was first published on the 15th May 2019 by Brush&Bow on Novara Media.