Winnie Linet is journalist, born and raised in Western Kenya. She worked in Lebanon for five years and in this four part series, explains why she left Kenya to work in Lebanon and her experience working under the expoitative Kefala system there 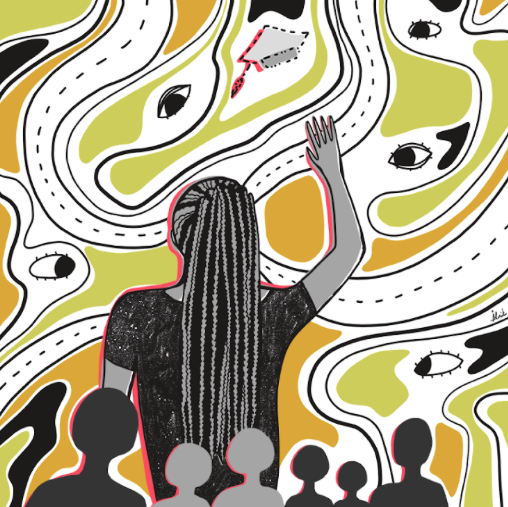 At the beginning of her journey, Winnie Linet is pressured between her dreams and the reality at her home place. In this impossible situation, she is willing to take the path of the unknown with the hope for a better future for her family and herself. The illustration depicts her at this moment when she is reaching out to her dream of studying journalism at the university and the pressure of her friends, family and relatives watching over her next steps. She has to leave her family behind in order to try her best to find a job abroad. Somewhere completely unknown.

My name is Winnie Linet. I grew up in Western part of Kenya, the fourth in a family of six. From a young age, I have had a great passion for journalism. This is what leads me to write this now. I worked in Lebanon as a domestic worker for 5 years. Lebanon, like many Middle Eastern countries employs foreign workers through the Kefala system. This is a system whereby the employer has a lot of power over the person who works for them.

I want to tell you what this was like, and what motivated me, and other young people like me to go and work abroad. It’s not always easy to understand why young people opt to go abroad, especially as they often have little knowledge of where they are going and what to expect, but yet still choose that over their well-being. It is therefore of great importance to shed light on the myriad of situations of their lives most hidden from the public, that propel such drastic decisions to leave.

To explain further, I will talk about my own struggles that life threw at me, the crossroads I faced that required critical thinking and thorough decision making in the quest to achieve my dream. It is a journey with a goal to achieve at the very end but one with its stumbling blocks, pot holes, desperation together with laughter.

Let us go back to when I was a seventeen year old girl. I had just finished my final school exams and I felt young and above all unstoppable. I was excited to be free, full of the energy to pursue life. Life seemed uncomplicated and I had a lot of dreams that I believed would come true.

The reality was different. My mum was the sole bread winner and had two daughters in college and two in primary school. Her finances were so squeezed, that I going to university depended on me getting a scholarship. If I failed the exams, I could not retake as my mum had debts and would not be able to pay. I passed the exams, but not enough to get a scholarship. So whilst I had a place to study journalism, I had no money to get me there.

A year later, without any work or hopes, I visited my relative to see if they could help me, but to no avail. A girl in this society is left at the mercy of God and discouragements were not evaded. One time, I met a school mate who had grown in sophistication over the years, who asked me, “Winnie where do you work nowadays?” I didn’t know what to say but just made up a lie so as not to feel bad. In this period, I tried anything just to look better. I felt like I was being stepped all over and that society looked down on me, so I felt like I needed to hide from everybody and avoid questions that could hurt me. It is hard to see your peers excel whilst you remain in the same cacoon.

For some time, I was like the vegetable seller, hawking toys. but this generated very little income. Then I worked in a Mpesa shop in Mombasa where I was nearly duped into sending money to someone claiming to be the owner. I then sold ice condensed water in packets for 5 Kenyan shillings to survive. I stayed with my sister during this time to save money.

I wasn’t alone in this situation, Vincent, a young man raised by a single mother had the foundations of his life pulled away when she died. Left alone tried to invest his savings in a small kiosk that eventually collapsed right now struggling with life. All over Kenya, there are young people willing to give up everything to make a better life. With no food to put on the table, a hungry person will not care what life abroad may be like, if only it offers a change.

In October 2013, a far off relative told me they wanted to help and asked me if I wanted to work abroad. He was all smiles. I had never been happier than then. I believed this would be the dream that I wanted but reality was far from that picture.

Later that month, I went to Nairobi where I was interviewed for my ability to care for sick people and express myself in English. I passed the interview and left the capital knowing I would go to work in the hospital as a patient attendant. Although the country of destination was not disclosed I felt good and excited for what was ahead.

Only when I received my visa did I know where I was going. Lebanon. All I knew about Lebanon was the country neighboring it was Syria and that Syria was at war. I got my consolation from within me that it is God who keeps people safe. I was going to survive, though fear was lingering within. I never knew of anyone who was going or who had been there, but a friend to my cousin had a brother who had been to Afghanistan and had come back. I knew I could do it as him.

Thursday of December 2013, was the toughest day of my life. My flight left at 9pm. Mum encouraged me to be strong. I packed my suitcase and bid everyone farewell. I had called my sisters the day before so had my mum, dad and brother. I was so emotional. I kept crying until my brother was affected and assured me that 2 years was nothing, we would see each other again. Little did I know it would be the last day that I ever saw him.

My cousin gave me the contract and I signed it without going through it in detail. At the airport, my father changed the money I had to ten dollars. I took my suitcase and left them. I did not know then, but I would only see him again after 5 years.