Soundtrack of Istanbul: The Street Musicians of Istiklal Street 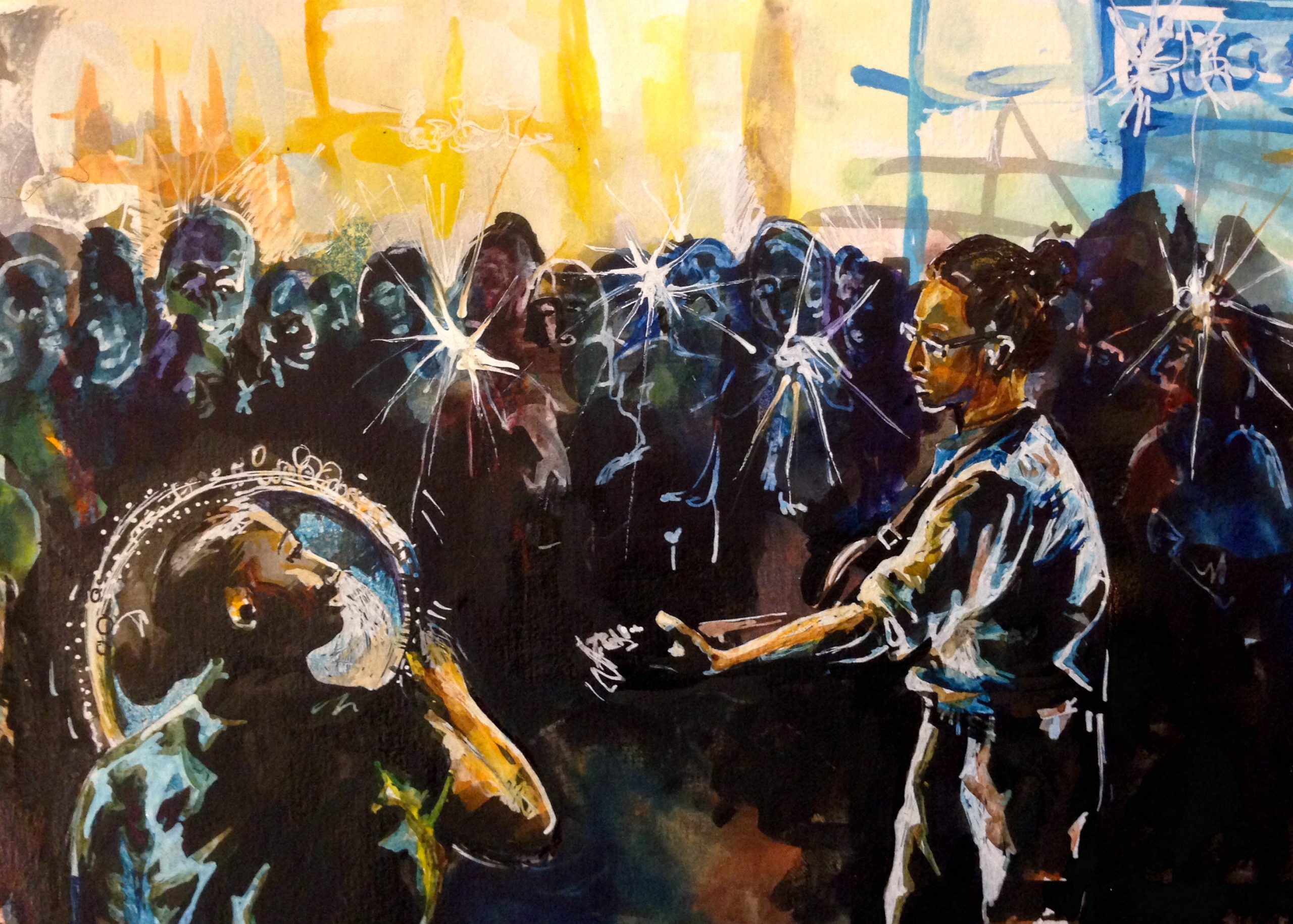 YOne rainy afternoon in the backstreets of Istanbul we walked up a flight of stairs to a café where, shaking the rain out of our hair, we were greeted warmly by familiar faces. Abdullah, a street musician from Syria, invited us to join him at the table, where he was sat playing the oud. A group of people stretched out in the far corner, watching the scene, their own instruments propped up next to them. More people arrived and gently took their instruments out of the cases, a violin, a qanun, and a daf. One person began to pick out a melody, others joining in until the music filled the room. We sat, and watched these highly skilled musicians playing incredibly precise, technically difficult Arabic music, then slipping into Bach and Beethoven almost as an afterthought, a work out for their fingers. 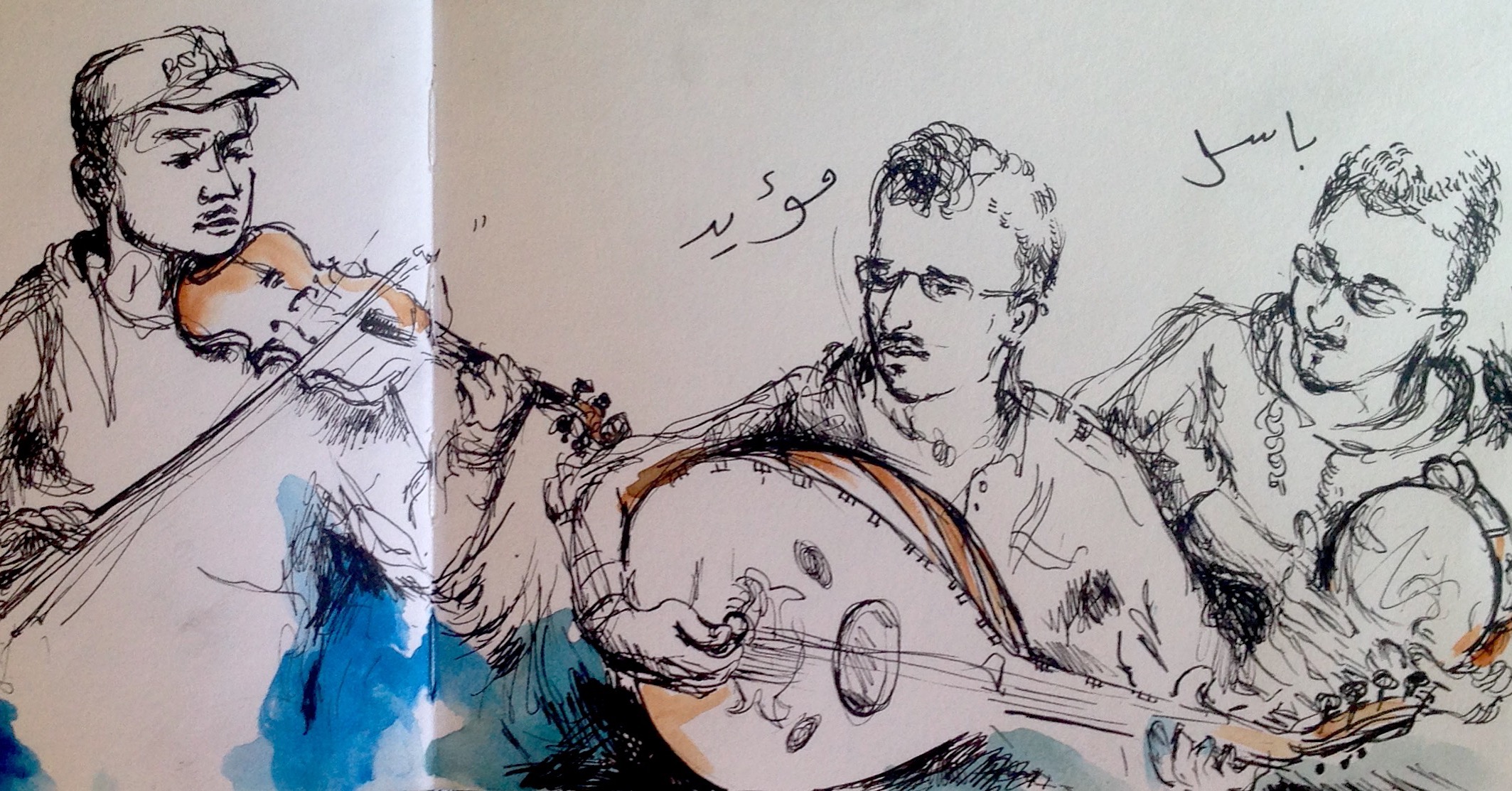 The music flowed through the afternoon, and all people in the room became part of the spectacle, instruments being passed around, the encouragement to learn, practise and join in. Hannah sat in the corner sketching the scene, and getting drawn into conversation we learned that these musicians come from all walks of life and social backgrounds. Some are professionally trained in the conservatoires of Aleppo and Damascus, playing in 5 star hotels, some are self-taught street musicians. Now in exile, their musical skill is a great leveller, the common thread which gently binds them together, and if Istiklal street is their stage where they play to make a living, then this café is the backstage where they relax and rehearse.

Istiklal Caddesi is a long, crowded, noisy street in Istanbul lined with chain stores, constantly filled with a pulsating wave of humanity. Here, the musicians perform on a daily basis to an audience of locals, visitors and dustbin men, with an orchestra of the passing trams, clanging construction noises and a myriad of languages all calling out together. Anyone and everyone who can play an instrument, not just those who are professional or well connected enough to get a gig in a bar, is welcome on Istiklal. Romanians with their accordions, Iranian santur players, French opera singers – all are part of the tapestry which makes up the soundtrack to this city which is at the same time both European and Asian. Some are regulars, familiar faces which reappear time after time, some are transient, passing through the city on their various journeys.

Unlike busy streets in other cities, people on Istiklal are not rushing from one place to another, they to listen to the music as they pass by. Groups form around the musicians, faces light up at the recognition of a familiar song from homelands in Syria, Iran, Kurdistan. A sense of communal belonging is created on the street of a foreign city as people join together, singing and dancing, clapping along to the melodies which soar from the hands and throats of the musicians. Songs heard on the radio during childhood, or a family member gently singing into their ear. The sense of familiarity is so strong that even those for whom the music is unfamiliar are swept away by the atmosphere.

One of the reasons we have been drawn to these stories is my passion for hearing and playing music on the streets, but also due to my friendship with one Iranian musician called Mehrdad. I met him when he was playing on Istiklal street, on my first trip to Istanbul last year. Ever since, our friendship has constantly revolved around music and the desire to always learn, play and share.

One day, after tea and baklava in the backstreets of Istiklal, Mehrdad took myself and Hannah one step further backstage, to his home, his personal rehearsal space, across Tarlesbashi boulevard, a busy four lane highway which is the natural border between the trendy Western chain stores and tourists of Istiklal and the dusty, winding streets of Tarlebashi. The shiny store fronts and neon lights disappear, replaced with old, crumbling buildings, laundry strung between windows criss-crossing the street, women in headscarves in doorways and men playing backgammon in small tea shops.

Mehrdad’s home is an artist’s workshop, and a reflection of him as a true artist. Everything is organised with precision and care, instruments displayed on the walls, the same phrase in Persian calligraphy repeated in red. A small wood working table between the two windows, and in one corner, three santurs carefully lined up. 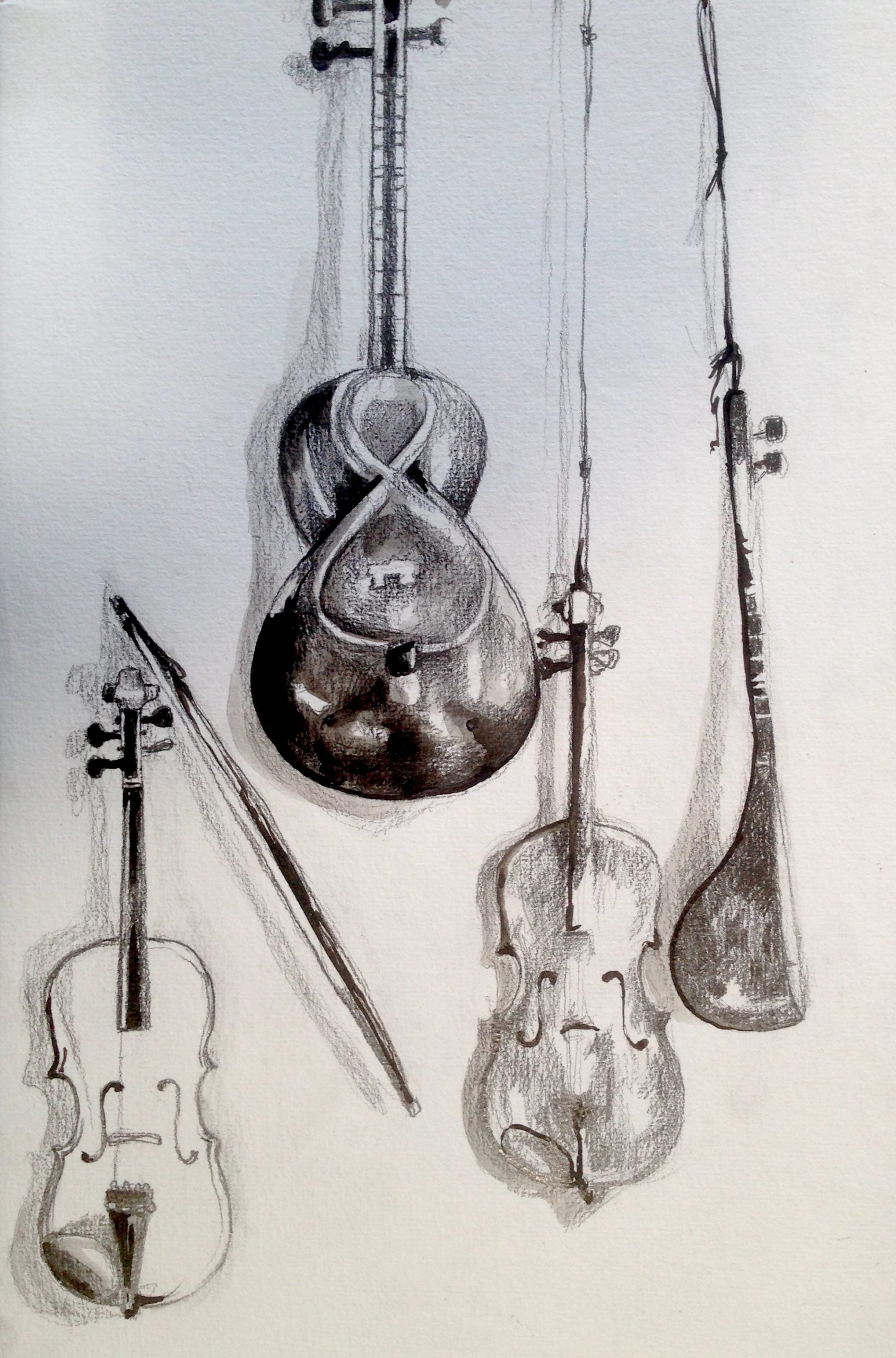 ‘I found these bits of wood, and the pegs so cheap – an Iranian man was selling them so cheap and nobody wanted to buy them. I thought, I will buy it. At the time I had a roommate, he told me ‘you are crazy, how will you make a santur? I can’t help you, don’t expect any help from me!’ I am not a rich man but I thought I will buy it and learn to make santur. I watched some things on the internet, and I learnt’.

This was 15 months ago, and he has since made 4 santurs, beautifully carved wood with a faint Persian calligraphic stamp.

‘I make mistakes, but you don’t see them… It is not perfect’. According to a Persian proverb, a Persian rug can only be deemed perfect if it has a flaw, an imperfection. I felt that much like the Persian rug on his floor, the imperfections are what make Merhdad’s handmade santurs so beautiful.

After sweet tea and a carefully prepared meal, Mehrdad told me to get my violin out, and play. I was nervous of playing, feeling like a complete novice in comparison to him. But, first and foremost, we are musicians and this is why he had brought us to his home, to play music together, to learn and improve in a completely unthreatening environment. In this most private of spaces, Tarlesbashi, Istiklal, it all drops away and the heart of it all is about music, connecting over music, playing music beyond the constrictions of how to play music, beyond any fears I had of performing and improvisation. This is a space that was created, broken only by the sounds of a child on the streets calling out in Arabic ‘Anna!’ (Mother!), and the call to prayer, and it reminds us that outside the streets are alive with people.

One evening, after Mehrdad had finished his playing for the day, over a cup of tea we discussed this life, of foreign cities and music on the streets.

He told me how he taught himself to play the tar, and began playing on the streets in Tehran, his hometown in Iran. For two years he played every Friday in a bazaar much similar to the Grand Bazaar in Istanbul. After some time the authorities began to give him trouble, in an Islamic Republic there is no place for music on the streets. He showed them an old history book which mentioned people playing music on the streets, saying ‘look, it has been happening for a long time, it is a job!’. They were dismissive, and he was banned from busking. He left Iran just over two years ago, and arrived in Taksim square in Istanbul with 10 lira in his pocket, and a few instruments. Here in Istanbul, Istiklal street has given him the opportunity to make his living through playing music.

‘I love this life, I so love this life. When you stand on the street, alone, for the first time, it is scary. But you will find something new inside yourself, a new world. You have the chance to express yourself… You are alone, but when you have an instrument, you can never be alone!’