Sounds of Eid from within the Sudanese camp, Calais 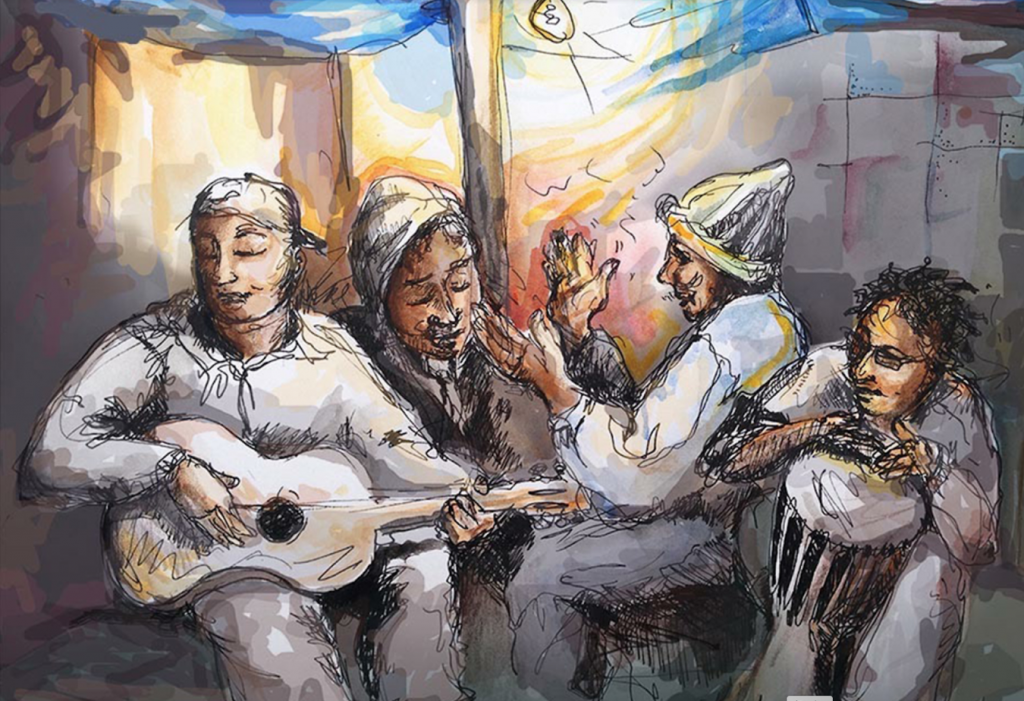 Written and Illustrated by Hannah Kirmes-Daly and Harriet Paintin

Friday 17th July, 2015. Arriving in Calais, we wanted to create a space of collaboration through our art and music, whereby we could get to know some of the people in the ‘Jungles’ and ultimately capture the experience of Eid through illustrations and music. We wanted to explore how these practices could be used to transcend the boundaries and divisions created by politics. By engaging with people who are caught up in wider social issues, we wanted to understand the individual stories and collective experiences that are often left out of the migration narrative. This was our first time embarking on such a project, an idea that has been brewing and taking shape for some time, so we were apprehensive and excited – we didn’t know what we were going to encounter or how we would work together.

As it goes, when you are least expecting it, life will throw you something amazing, and that is how it felt when we unexpectedly met (on Ed’s recommendation) Louise, a woman from Calais, an activist and artist who generously invited us into her wonderfully eccentric home. We met in ‘the office’ which turned out to be a building in the centre of Calais, that has been secured by the migrants and activists to set up English/French/Arabic classes and all sorts of other community workshops and projects. The new space was electric with enthusiasm and potential, with suggestions of recording studios, radio programmes and children’s areas all being thrown around. In Louise’s home we were met by her father who regaled us with intricate tales on the functions and air flow of wind instruments. We were slightly overwhelmed and entertained ourselves with the dusty objects which were crammed into his music workshop, whilst nodding along in semi-bewilderment and fascination.

As we sat around the Louise’s family table we learned that in Calais the refugee camps have all been moved out to the outskirts of the city, a good hour and half walk from the port. Out of sight out of mind, the age old tactic. This means it is much more difficult to bring supplies to the camps, although local charities and activists continue to do so. Nevertheless, a thriving black market has developed inside the camps. People are now a lot further from the ports, a good hour and a half walk away. There are over 5,000 people living in the Jungle, and more arrive everyday. Some have been there for as long as two years.

On the evening of Eid we piled into the car with Louise and family and drove out to the Sudanese camp in the Jungle. As we pulled up we were met with the striking sight of three or four men silhouetted against the setting sun, standing on the sand dunes which blocked our view of the jungles. For a moment we paused, apprehensively and excitedly assessing our surroundings. The moment was broken by the sound of Louise’s father playing the French horn, and all faces broke out into smiles, the air filled with laughter, and the music had instantaneously and incredibly broken down the barriers between us, we proceeded with ease.

We climbed over the sand dunes and in the fading light saw a man facing Mecca on his prayer mat, next to a large tarpaulin structure which we made our way towards. Soft voices and drum beats paused as we slipped out of our shoes and into the dimly lit tent. We were met by a group of men sat on sofas and beds; it was a large space which served as a communal area and a home for three men. Exchanging greetings, ‘salaam alaykum’, ‘wa-alaikum salaam’ we settled on a spare bed. Gently, as if without interruption, the music started up again. First, the beat of a drum followed by the tinny tone of the guitar. One man, Wahed, would start singing, smiling, his head tilted upwards, his eyes closed and then, as if these songs were part of every man’s memories, the others would join in, clapping, singing in harmony, rising to dance. We sipped sweet tea, passed around cigarettes and sweets, and tried to imagine the memories and places evoked by the music. Far from home and family, they sang, and sang, and sang.

As you can hear the music is incredibly rich and beautiful. We were told that the lead singer Wahed, is famous in Sudan. But sitting inside that warm dark tent, it did not feel like there was a lead singer, rather one voice would start and everyone would lift the melody up, tapping out rhythms and crooning responses. At one point we broke out into song, weaving the tune of a light Scottish jig into the tent. This was met with laughter and applause.

As melodies floated through our heads and into the night we moved outside the tent and talked to some of the men gathered there. The camps have organized themselves by country, even by locality. Everybody in this part of the jungle came from Sudan, and most had some sort of connection to each other from back home. There was such a strong feeling of community, people living and celebrating together. But we were reminded of the reality of the situation when Awad said, ‘when we have guests [in the jungle] it’s good because it keeps our energy up… but this is like a dark place in my heart – people are trying to leave’. Hakim told us that for him, Eid had been a sad day. He’d spoken with his mother, and she cried. He quickly steered the conversation away from such topics and talked in great detail about his Master’s degree, it was clear that he didn’t want the situation to define him, or our communication with him