Remembering the Future: #1 Waiting for Asylum

A couple of months after my arrival to Denmark, I started contacting my diasporic siblings in Europe and re-knowing them again as time and space had faded their shapes and voices. Smart phones and online communication were not so advanced in the late 90s and early 2000 as nowadays. I bought some calling cards to have hours of conversation with my family.

The dearest of them was my little niece, whose mum died of cancer in 1998 in the UK after two years battle with the disease when she was only 8 years old. In our first conversation with her I tried to establish contact with her, regain her trust, and closeness to her crushed little soul. I asked her what she wished for her birthday and she answered me some animal drawings. Her favourite animals, which were also mine when I was little were monkeys. I promised her to draw her something and post it to her.

Portrait of my niece Bru Aged 10. Sketched from a gift of pencils she had given me (2000)

I went to the central library’s children’s section in Copenhagen to look for animal picture books, and I found a nice book about wild chimpanzees. While turning the pages of the book my eyes caught a photograph taken of a chimpanzee mum holding her baby. I was very surprised to see all the emotions in their eyes, especially the baby which seemingly was trying to catch the mums attention. I decided simultaneously that the photo would be the best subject of my drawing. I had bought a new Derwent graphic set and that was the best way to try them. There were so much details and shades in the photo, the more I looked at it the more it made me more excited to draw it.

During that time, in spring 2000, I was living in Avnstrup, the biggest camp for asylum seekers in Sjælland and I had recently moved to a small room with two single beds in a shared house. On my first arrival to Avnstrup in November 1999, they put me in a big room with three bunk beds. Avnstrup was the second camp I was relocated to after staying for about a month in the first receiving camp. Since then I had shared rooms with all sorts of women like my situation. When I realised that cases would take from two years up to unknown time, as there were many people in the camps whose cases were refused for more than 8 years, I needed some privacy.

While awaiting during that unstable impending situation, I needed at least physical stability, a framework and daily routine. In the early few days in Avnstrup I observed that people were sent randomly with very short or even no notice to the many other camps in the remote islands in Denmark. Thinking that I might be relocated again to other isolated areas added further to my already existing anxiety. I have been on move, with risk and unknowingness across countries and borders for more than 6 moths since I left Kurdistan. I simply needed to settle down in one piece in one place while my case was being processed. I was told that if I volunteered with the Danish Red Cross, which was managing the camps, they might let me to stay and most probably give me a smaller room with less beds. Being busy was the best way to keep me going while not knowing what the future would hold. I made a routine for myself; going to language classes, self-teaching with audio books and dictionaries, helping at the reception with petty cash, teaching English to residents in the evenings, and joining the camp’s newsletter group.

The camp was a big military base, with the capacity of 800 people, which after the 2nd world war was used as a hospital for people with mental health problems and/or tuberculosis patients. It was located in the middle of nowhere in a forest some miles away from nearest civilisation which you only could be driven to and was hard to reach on foot. I was often wandering around in the forest, taking different paths trying to enjoy the beauty of the different shades of greens the trees and plants were wearing. When I look back, strangely I never felt scared to be alone in the forest. That is maybe because firstly, I didn’t hear of any incidents that had happened and no one warned us not to walk into the forest. Secondly, purely because I had no any other alternative. Either I had to stay in my room and let memories eat me up, or I simply drift in the vast forest deep in the woods in the surge to feel life whilst everything else was set on standby. The beauty of the landscapes, the delicacy of spring sunrays together with the merged transparent colours stunned my heart and soul. The sceneries were a physical affirmation manifesting that life was full of exquisiteness, though not for me at that moment. I felt I was outside of life looking at it. 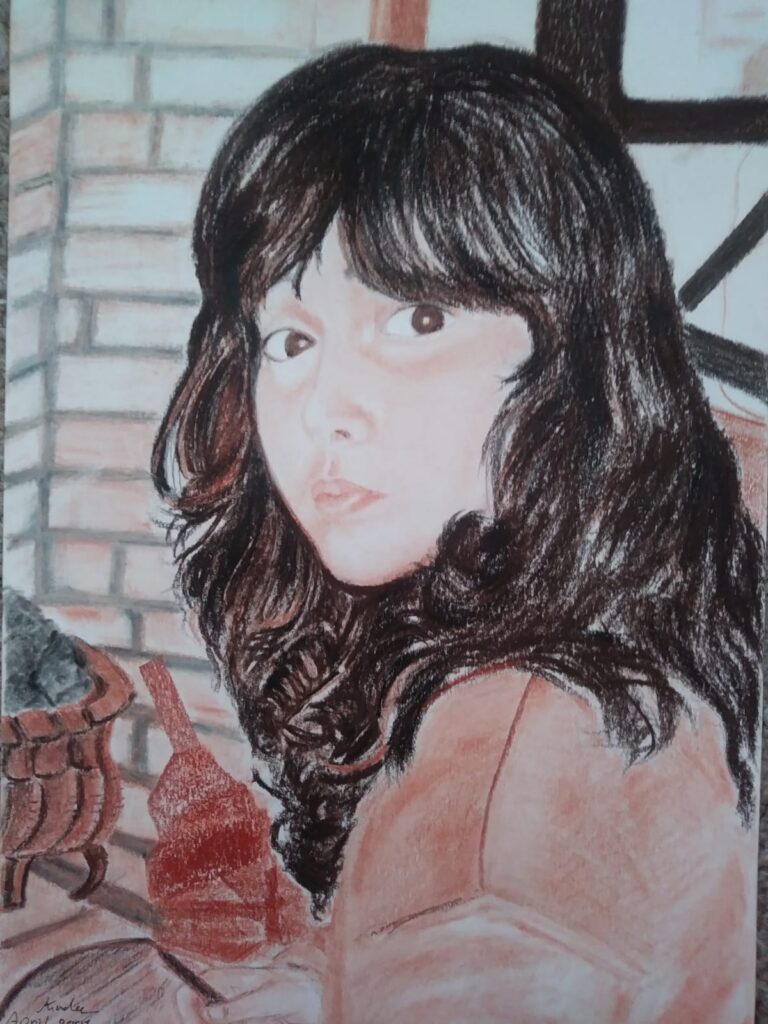 There were occasionally mountain bike riders passing by. I remember once I went too far in the woods and suddenly a man riding a bike passed by me fast and said surprisingly in my own language, “What are you doing here sister?” questioning me. I recognised the man, he was an Iraqi Kurd from the camp. I got very irritated, because I didn’t have the chance to reply to him “and what are you doing here brother?”. In his undertone he was indirectly telling me ‘you shouldn’t be here unaccompanied’, and I wanted to tell him it is none of his business to comment or interfere with a woman whom he has no any connection to apart from our ethnographic positioning. This is not Iraq.

There were only two beds in my room in a shared house and I was the only one who moved in it. I was sleeping on one bed and on the other bed I put my drawing kits. I didn’t need to collect it, as that was my art workplace. I had it there and whenever I had time and energy, I was working on it. Sitting on a bed and drawing was not an easy task. The limitation of body postures you can take to work on details would not allow to focus for a long time. However, the joy of having a quiet place with some privacy in such a big camp had overridden any other inadequacies which for my situation sounded as a luxury problem.

At a point the drawing turned out so nice that I was getting more and more exited and secretly questioning whether I should keep it or keep my promise and send it to my niece. After a while working on the drawing, I had a problem and got stuck for a long time which really frustrated me for not being able to finish it. I simply couldn’t find the suitable pencil shade for the eyes of the baby chimpanzee. There was a very meticulous transparency in his eyes which none of the graphic pencils could capture. For some days I was pretty upset as I couldn’t finish the drawing and I was thinking to leave it, which I did. The drawing was forsaken for a good time, left covered with a clean paper to protect it from dust and sun amidst the spread of graphic pencils. 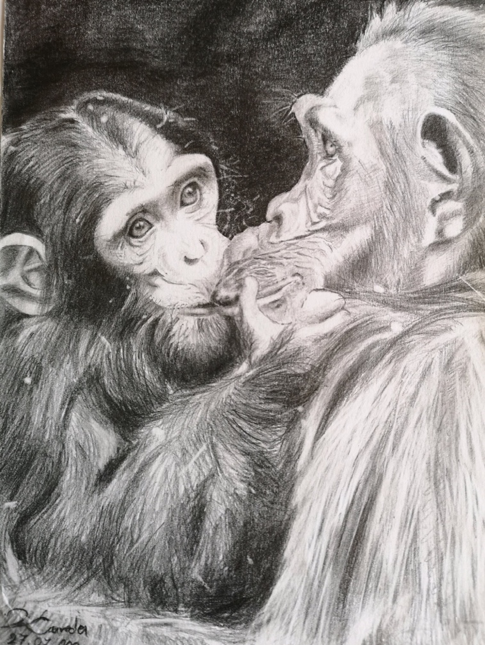 One day I came back to it looking at the eyeless baby chimpanzee determined to solve this mystery. ‘In a set of 12 different shades there should be a pencil to do the job!’ I told myself. Finally, after trying all the pencils on a separate paper, I found the magic pencil: it was F5 Derwent graphic pencil which saved the drawing from being abandoned and thus my promise to my niece of a birthday gift.

I fell in love with the final drawing. It revealed an array of mixed feelings: an enchantment that I am still capable of making beautiful art, and in fact much better and with improved skills, despite the disruptions my journeys with life have caused the art’s journey with me. An acknowledgment of my artistic skills which is self-taught, but at the same time a self-blaming that I should have done much more and to my best ability, using any opportunity to practice art. I would apparently have been much more improved than even now. Suddenly I remembered all the other art pieces I had dedicated to friends and families, realising that I didn’t have any collection of my best drawings, not even a photocopy of them. Heartbroken, I decided that by sending this original drawing off to its promised owner will be the last time I would ever give originals away. I took some photos of the drawing and post it to my niece, Bru.

I first saw the drawing again in May 2019. I have borrowed it from my niece to participate in an exhibition in the Refugee Week Festival and then in St Werburgh’s Art Trail in Bristol.