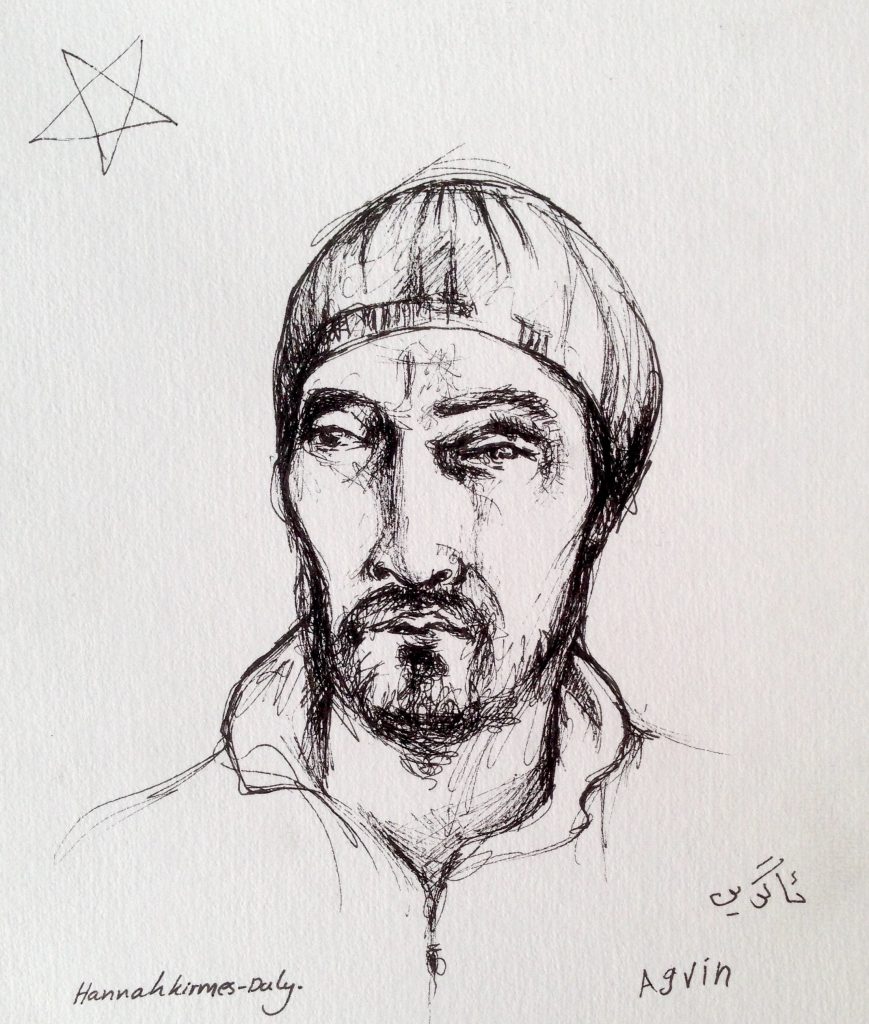 He stood out from the dusty mass of people arriving and being put onto buses; holding himself with pride, the face of a fighter. We watched him from a distance as he paced up and down, like a lion in a cage, assessing this impossible environment where refugees are processed, ticketed and given drab sandwiches. He approached us, and picked up our derbouka. His slender fingers tapped out a rhythm as he sang, his voice heavy and melancholic. He stopped abruptly, and complained that his fingers were too cold.

‘You have the face of a guerrilla’, he pointed his long finger in Hannah’s face. ‘A guerrilla fighter’.

Taken aback, we asked him where he came from. His hardened, yet fiery eyes, bore into us as he hesitated before responding.

‘Kobane’. He gave the two finger salute, and we nodded in understanding. He stepped back into the crowd, pulling his red sports jacket around him and glaring across the road, before turning on his heels and coming back towards us, demanding what we know of Kobane, Rojava. We shared fragments of information about Kobane, a general awareness, and the tension in his body relaxed somewhat, as if reassured by the fact that awareness of the long fight which was his whole life had reached the shores of Europe before him.

He pointed again at Hannah’s dark hair, and eyebrows. ‘Kurdish women are the symbol of our struggle. There is nobody stronger, not even men! In Iraq they have been fighting Isis for more than a year, but our Kurdish women defeated them in a month. For five years I was fighting, with them…’ His voice took on a tone of sadness, reflected momentarily in his strong face.

Hannah asked if she could draw him, and he was surprised. ‘It is my honour’, he replied and stood completely still as Hannah’s pen flew across the paper, outlining his strong features, hallowed and toughened from years of fighting and a long, perilous journey.

When the portrait was finished, a fleeting smile flashed across his face and he wrote his name in the beautiful, flowing Kurdish script. Agrin, meaning fire. He insisted that we tag him on Instagram, writing his profile name in my notebook. He pointed at the name, and said, ‘She was a guerrilla, who fell during the fighting …’