In 1998, in a region known for its harsh drug regulations, Lebanon created a law stipulating ‘treatment as an alternative to prosecution’ for drug users. Despite being hailed at the time as a progressive step forward, today the gap between the law and its enforcement means that in actuality only four percent of arrested drug users are referred for treatment, rather than prosecution.

“Of all the people arrested for drug use since 1998, only around 800 have been referred for treatment by the courts,” says Michelle Wazan from Skoun, a local NGO and Addiction Treatment Centre.

The reasons for such a low number are many. Lebanon’s Drug Addiction Committee (DAC), responsible for supervising court-mandated treatment was only activated in 2013, 15 years after the law was passed.

“The problem is also a lack of awareness,” Wazan told The New Arab. “Even some of the judges don’t know the law themselves, or that the DAC has been activated.”

In a survey recently circulated by Skoun among Lebanon’s court rooms, judges aware of the law stated that their lack of referrals to the DAC was also based on their distrust towards a treatment process they saw as a way for drug users to evade prosecution.

“Much of the problem is battling ignorance and stigma around drug use,” says Wazan, especially in the areas where services are lacking.

“A few years ago, the shame around using drugs was so high that nobody would admit needing help,” 21-year-old Hussein tells The New Arab. Hussein is from the northern city of Tripoli. Clean shaven, his face flecked with freckles, he starting to use drugs at the age of 15.

“We were hanging around in the streets all day with nothing to do. We used to buy benzhexol from guys who got it from the pharmacy.” In poorer neighbourhoods, cheap legal highs are commonly used.

“When the armed clashes broke out in my neighbourhood, they used to pay us $50 to sneak to the frontlines and throw grenades. I didn’t even think about it. We were so addled with drugs.”

Having just come out after two years in prison, his criminal record makes it hard to find work.

“Now I know better,” says Hussein. “I am clean from drugs, but we are so many competing for work that as soon as employers see my criminal record, that’s it. They send me away.”

Asked if he knew that he could have chosen treatment rather incarceration, Hussein laughed. “If I had known, do you really think I would have chosen to go to prison for two years? Let me tell you, I have fought in Syria, but the biggest battle I have ever faced was fighting my addiction. If somebody had offered to help me overcome my addiction, of course I would have agreed.”

The war in neighbouring Syria has had a large impact on Lebanon, especially in the northern region of the country which hosts one of the highest number of refugees per capita in the world.

“Conflict and war always create a need for drugs as well as facilitate production,” Joseph El-Khoury told The New Arab. Director of the Psychosis Recovery Outreach Programme and a Professor in Psychiatry at the American University in Beirut, Professor El-Khouri explains how the prosecution of drug users has led to the overcrowding of prisons, and a growing number of fatal overdoses, as users avoid treatment from fear of arrest in hospitals.

“Lebanese security forces are poorly resourced and poorly trained in handling arrests of drug users,” states El-Khoury. “Arrests are often very traumatising and do not serve any purpose”.

Reports show that incarceration often worsens the psychological condition of users, who may be forced to serve sentences sharing prison cells with hardened criminals in inhumane conditions.

Further, it is still common practice for hospitals in Lebanon to call the police on drug users coming in for emergency care, despite a circular sent from the Ministry of Public Health in 2016 asking hospitals not to.

According to a 2018 survey, out of 133 hospitals Skoun contacted in Lebanon, only 30 confirmed not calling in the police on a patient suffering from drug abuse.

“This leads to people being fearful of taking someone overdosing to hospital, with arrests at hospitals often being quite brutal, carried out whilst patients are still semi-conscious or being treated for their overdose,” Wazan added.

Where awareness is higher, such cases are more avoidable. John, a 34-year-old, considers himself lucky. “I was a user for 11 years and never had any trouble with authorities.” 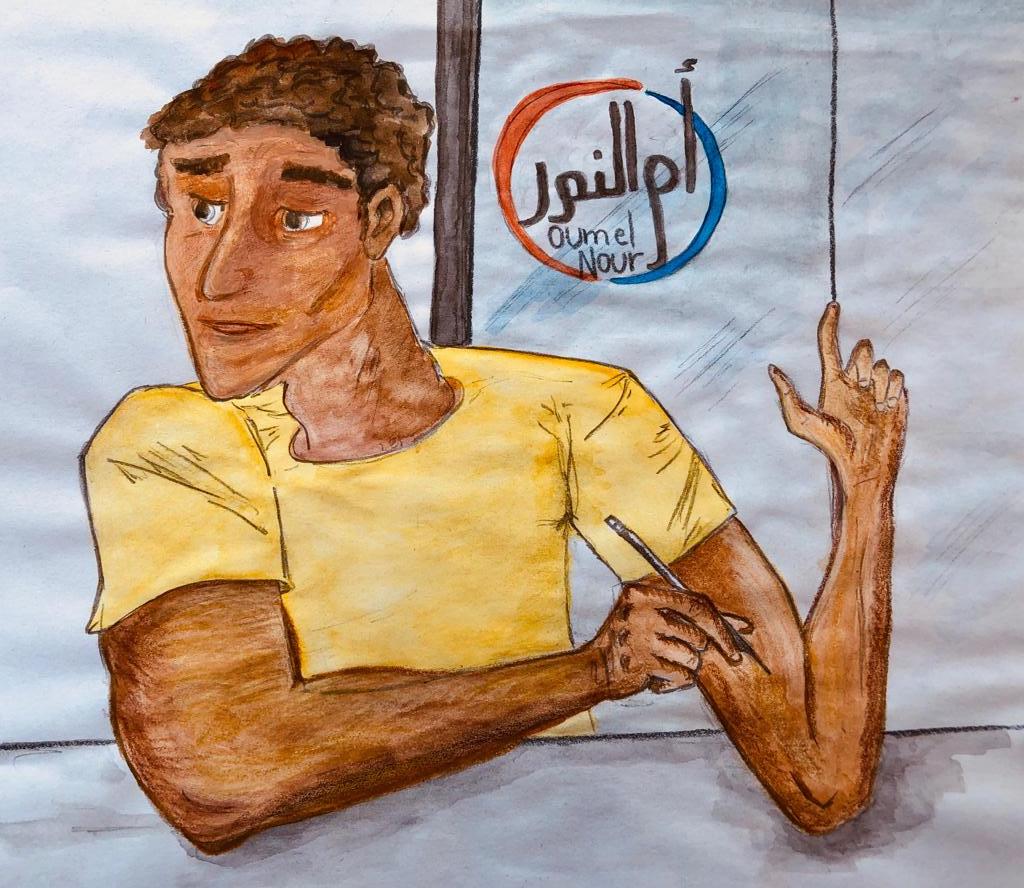 John, 34-year old, was a former user and now works and is an active member of Oum El Nour. Illustration by David L. Suber

From a small village north of Beirut, John struggled with addiction for seven years in secret.

“Nobody knew because I had enough money to finance my addiction. It was only once the money started to dry up that the real problems started. I used to steal my mother’s jewellery. When they found out they sent me to a psychiatrist but it didn’t work. I tried drug replacement therapy but that didn’t work either.”

From a less impoverished background than Hussein, John managed to avoid a criminal record. And finally, with pressure from his family, he went to Oum El Nour’s rehabilitation centre where he succeeded in defeating his addiction.

“I was lucky, many people don’t know of Oum El Nour’s existence or they think that it is some kind of jail where they will brainwash you,” John added.

In many areas outside of the metropolitan region of Beirut, drug awareness and treatment services are scarce or non-existent. A 2017 report by the Lebanese Ministry of Public Health confirms that over 80 percent of drug related health services are located in Beirut and Mount Lebanon.

In response, Oum El Nour, one of the first ever rehabilitation centres in Lebanon, recently opened its first reception centre in the northern city of Tripoli, providing counselling services and a hotline.

“We understood people in the north have no chance of accessing services in Beirut if they are not made aware of their existence,” explains Bechir Aouad, Oum El Nour’s outreach officer for the north of Lebanon.

“It has taken a long time to sensibilise the youth in Tripoli, but we are starting to see the effects of our campaigns. Many are starting to use our counselling services available at the Tripoli office or contact us through the hotline.” The Lebanese government is also supporting this process.

“There is a real interest from the Ministry of Health and Education,” Bechir Aouad tells The New Arab. “They cover 80 percent of our treatment costs which means we can make most of our services free for our beneficiaries.”

Oum el Nour runs two rehabilitation centres, one for men and one for women, accepting patients for 15 month periods. Patients are mandated to follow quarterly rehabilitation cycles, but are free to stop the process at any point.

“We also work on prevention and sensitisation campaigns, working with Lebanese law enforcement in prisons to train guards about drug abuse and treatment,” Aouad explains.

Despite the underlying need to increase the government’s involvement in support of treatment services and facilities, years of advocacy and work by civil society organisations might be finally paying off.

In June last year, President Michel Aoun declared that “drug addicts are not criminals,” sentencing much of the widespread social stigma conflating users with criminal offenders. And with careful pressure from civil society groups, it appears that these words could begin to ring less hollow to the 96 percent of drug users who have been arrested and criminalised for their use.

The different stories of Hussein and John speak clearly of the inadequacy of law implementation and of the imbalance of service provision that in Lebanon very much depends on a population split according to both economics and location. In Lebanon, much of the current work on the ground is being done is by the civil society sectors and NGO’s.

“It is time the state steps up its work to enable services across the whole country,” says John, who after going through rehabilitation at Oum El Nour, has now joined the organisation as an educator.

John’s positive story of treatment and rehabilitation shows that, despite the stigma and gaps in the law, recovery and treatment from drug abuse is possible in Lebanon.

“Oum el Nour gave me my life back. They say I gave myself my life back, but they showed me the way. I worked hard of course. I did amazing. I am proud of it. But without their support it would have been impossible.”

This article was first published on the 16th of April 2019 by Brush&Bow on The New Arab.