Winnie Linet is journalist, born and raised in Western Kenya. She worked in Lebanon for five years and in this four part series, explains why she left Kenya to work in Lebanon and her experience working under the expoitative Kefala system there. 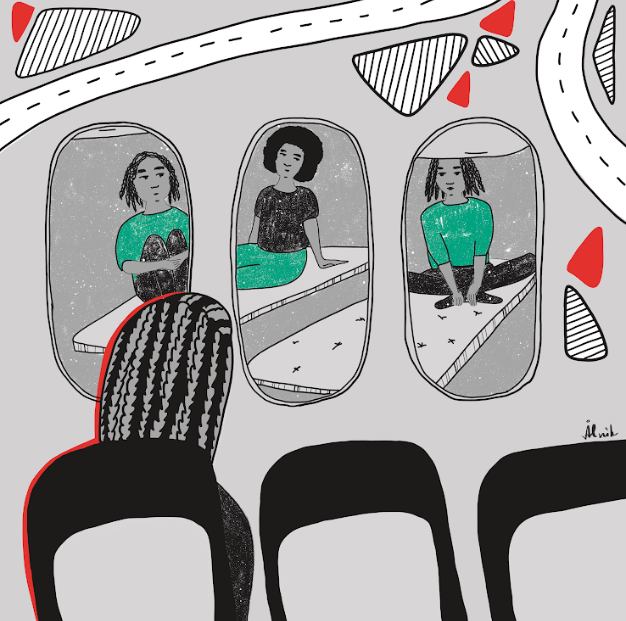 When Winnie arrives in Lebanon, she faces an unexpected reality: not working what she imagined she would; staying in a place with other women like her and being discriminated because of the colour of her skin. This visual presents her in the moment of arrival, looking briefly at her near future from the plane window.

Now in the first part of this blog, I explained to you my reasons for leaving Kenya. Now, I will talk about my journey from Kenya to Lebanon, my experience when I arrived. I will let you walk with me to unravel the new discoveries that I had to accept since I wasn’t give the chance to choose, but rather I had to resign myself to fate. This story will explain my first encounter with my Lebanese employers.

The flight from Kenya took 9 hours with a stop-over at Addis Ababa in Ethiopia. I was sad and nervous all the way. We landed at Rafiq Hariri international airport at six in the morning. With a new day ahead, I knew was to stop crying and embrace a new life. Upon arrval, I was led to a waiting area, and found that I was not alone. I found three Kenyan girls who quickly saw that I was soaked in tears and approached me speaking in Swahili. “Wewe ni Mkenya?” One of them asked…asking if I was Kenyan I quickly nodded. They introduced themselves and before I knew it I felt at home. Two of them had come as first timers like me, while one was coming from vacation after three years of service. Each of us explained what we came for. The lady who had already worked in Lebanon told us not to have our hopes high, but be ready to accept what would come in the name of a job. She too had come expecting to be a receptionist, but ended up to being a house girl. On hearing that, my hopes of working as a patient attendant faded to what I would discover shortly. However, I was happy I was not alone.

Waiting in that airport, I saw many other nationalities. There were women from Bangladesh, Nepal, Ethiopia, Philippines, Benin and Madagascar and more. All were seeking work. On seeing that I knew that at least every part of the world has its own problems and this motivated me to rise and embrace my new reality. With the girls we shared our anxieties, pains and struggles and grew in the will to overcome hardships.

One after the other, the staff called out their names and they left. I also learnt of girls coming all the way to Lebanon to work only to be neglected at the airport for three days or a week without anybody showing up to claim them and how they starved. A chill ran down my body on such a discovery from the girl and I kept praying my employer would come. Seven hours passed before they called my name and with sigh of relief I left to meet my new employer.

I was met by a woman in her late fifties. She smiled at me and led me to her car. Whilst in the car she introduced herself to me and asked me a few questions, then gave me some snacks that I never ate since I had lost my appetite. She told me she was my employer and would explain everything at her house. Within no time were there are welcomed by a Philippine lady in her forties. I refreshed and was offered a meal upon which she requested to talk to me for a while. The talk was nice though fear engulfed me I contained myself. She told me that I was not going to work for her but her mother. I remembered what I had been told and I took a sigh, the job was different. Apparently the mother was very old and needed someone to help her. The conversation pertaining work ended there but was to be picked by her brother to Tripoli. She told me I was needed at the office for some formalities for the next three days upon which will be ready for work. I was to be picked after the days had ended.

The brother came and I could judge that he was nice. He struggled to make me understand what he was saying to me in the car so we did not talk much but I felt safe with him because I saw a father figure in him. Beirut to Tripoli took approximately 45 minutes. The office was just a 10 minute drive within Tripoli. I arrived and was led inside and registered at the office. Then I was led to a room where I found around 15 to 20 girls.

We slept on thin mattresses that we spread on the floor. The next morning, we woke up and I could see that we were only African girls around. That day was all calm since we were told to relax after the travel. The second day we were spread in groups to clean the office premises, toilets and the room we shared. During the same day came the directive that we had to undo our hair, for those who had it plaited after which we had to shower. Everyone of us was then supposed to wash the hair with water provided in the buckets. I took the initiative to take shower. I did so. I had just finished bathing when I felt a burning sensation all over my face. I kept to myself for a while before disclosing it to a few Kenyans there, who unfortunately felt that too. We kept wondering and suffering not knowing what was the reason for that until one Ethiopian who had a problem with her employer reported and told us that the water had been treated with pesticide to kill possible bed bugs that they believed African girls carry in their hair because they believed that we rarely take showers.

I was left heartbroken at how we were viewed in the eyes of our employers. That night I barely slept because it was so uncomfortable. The third day came, but no smiles but worry of what would come after that. I was picked at one ready for work but was I really ready?

This was how my journey had unfolded. In different part of the world discrimination for blacks wrapped within myths and misconceptions end up hurting us the most. In all this, the African child will always try to come out strong even when it is hard. Millions upon millions strive to start life a new in those areas and I sure was one of them.