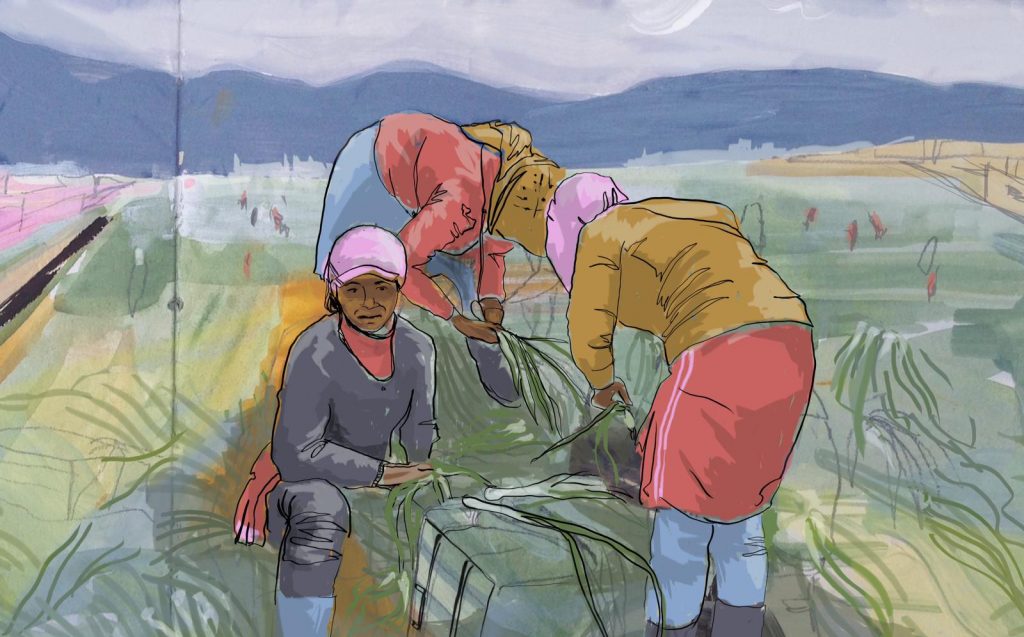 This is the eighth and final podcast of an 8-part series. It is an interview with Randa, a young Syrian woman from the city of Der Eizzor, telling the story of how she was smuggled out of Syria to escape the war, and of the corruption and exploitation she experienced as a refugee in Lebanon.

In Syria, Randa was a farmer, living a hard but peaceful life in the countryside by the Iraqi border. When the conflict spilled out from the urban centres of Daraa, Homs, Aleppo, Damascus, it didn’t spare those parts of Syrian society who were not politicised for or against the regime.

Fleeing Syria, Randa found herself, like many poor Syrian farm workers, forced to work the land in Lebanon for $2 an hour. Half of her wages is then spent on paying rent back to the farmer for a run-down tent set in a field of his land.

To the eyes of many impoverished Lebanese landowners, people like Randa are a great opportunity for greater income, as the economic crisis in Lebanon has created a situation where many Syrians can be seen as cheap labour rather than a population needing protection. Randa’s testimony helps understanding the workings of a feudal system based on different layers of hierarchy and abuse.

Since the borders between Lebanon and Syria were closed in 2015, Syrians trying to escape the war are smuggled into Lebanon as cheap labour, sold with a huge debt they have to pay back to the landowner hosting them on his land. This debt binds refugees to the landowner, who usually charges for every possible service needed (rent for a tent, electricity bills) and regulates life and work in the camps, often through a Syrian Shawish (a camp leader).

Randa’s opinion of Lebanese landlords and Syrian Shawishes is not representative of the way in which all Syrian camps are organised. However, the majority of camps based around agricultural work present a similar structure.

As Lebanon does not allow for international or government-regulated refugee camps, international relief organisations and the UN refugee agency often end up inadvertently sustaining such a system of corruption and abuse, as the aid disbursed is often impossible to track down, whilst beneficiaries are difficult to hold to account.

When listening to this podcast, it is important to remember that only 20% of Syrian refugees in Lebanon live in informal camps, with the majority living in garages and small shared flats in cities and towns. In light of this, Randa speaks of only one of the ways Syrians have managed to survive in Lebanon.

Randa’s experience represents only a fragment of the very complex puzzle of memories and positions Syrian refugees have of their displacement in Lebanon. As such, it should be heard in relation to the contents expressed in the previous podcasts.