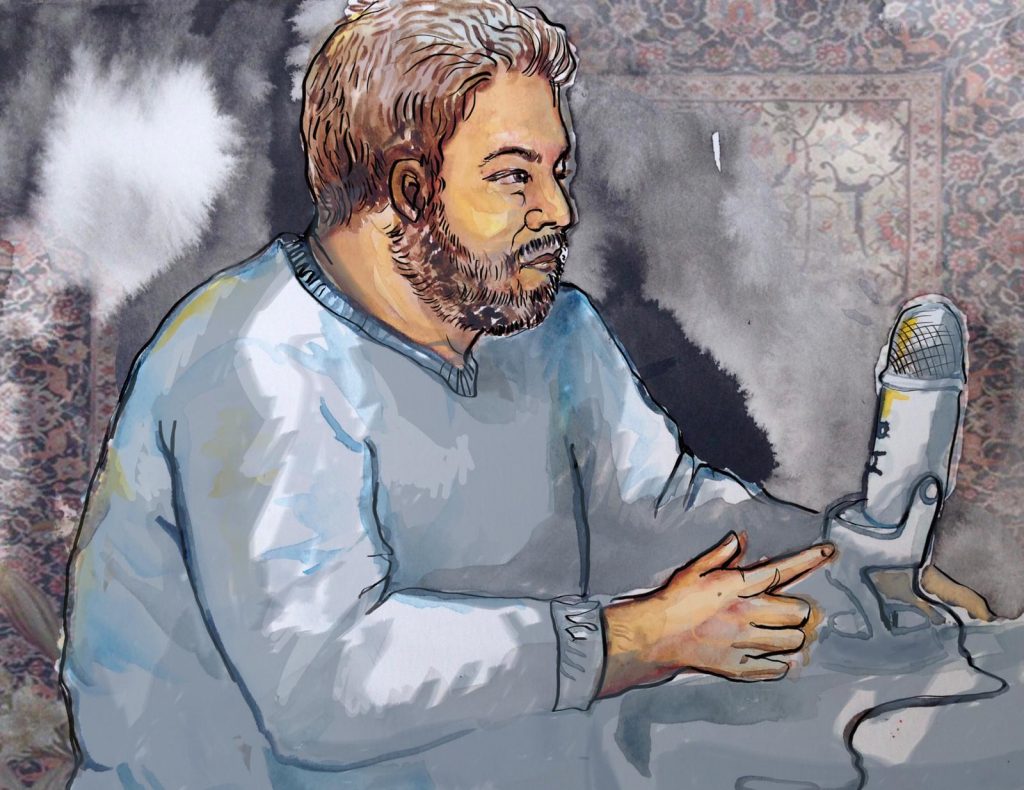 Radio Hakaya is a community radio project started by Brush&Bow in a refugee camp in North Lebanon. These podcasts are with individuals whose communities have been directly effected by the war in Syria and the displacement of Syrians to Lebanon. Each podcast presents a subjective opinion that, combined with the rest of the series, provides a mosaic of differing perspectives and experiences of the reasons that people fled to Syria, the living conditions in Lebanon and what the future might hold.

This is the second podcast of an 8-part series. It is an interview with Abu Mohammed, a former policeman from the city of Homs, in Syria. Abu Mohammed fled to Lebanon with his family early on in the conflict, to avoid being involved with the regime’s repression after having witnessed its brutality. In this interview, taken in a refugee camp on the Lebanese-Syrian border, Abu Mohammed shares some general reflections on the impact of the war on the Syrian people, and of the responsibilities the regime holds at the roots of the conflict.

Being in his mid-40s Abu Mohammed is from the generation who lived the transition between the rule of president Hafez al-Assad and his son Bashar. Hafez had been in power 29 years when his death paved the way for his second eldest son Bashar to become president of Syria in 2000. Bashar inherited a police-state, one in which arbitrary arrests, disappearances and torture were all justified measures against the threat of political opposition and destabilization.

Abu Mohammed recalls when, following a spate of high-profile assassinations against members of the ruling elite in 1982, Hafez al-Assad sieged and bombed the city of Hama, stronghold of the Muslim Brotherhood opposition, killing what international observers have estimated as over 25,000 civilians in the name of national security.

Eight years of war have shown that Hafez’s son Bashar is capable of the same ruthlessness. When the wave of protests and uprisings across the Arab world reached Syria in 2011, the regime responded with violent clampdowns, paving the way for peaceful protests to escalate into an armed struggle leading to outright civil war.

Now, as the war burns to an end, the regime is encouraging Syrian refugees to return to Syria, promising amnesty for deserters and army dodgers, engaging in a bid to re-gain international legitimacy and funds for the reconstruction of the country. However, widespread reports of arbitrary arrest, disappearances and torture from Syrian refugees who have returned to Syria leave many refugees mistrustful of the regime’s promises.

From his tent in the north of Lebanon, Abu Mohammed is adamant about the need for Bashar al-Assad to leave the presidency if any real solution to the war is to be found. In his eyes, a Syria without Bashar al-Assad is the starting condition to guarantee some safety to refugees wanting to return home.

His experience represents only a fragment of the very complex puzzle of memories and positions Syrian civilians hold on the uprisings and the war that is tearing apart Syria, and should therefore be heard in relation to the contents expressed in the previous and forthcoming podcasts.