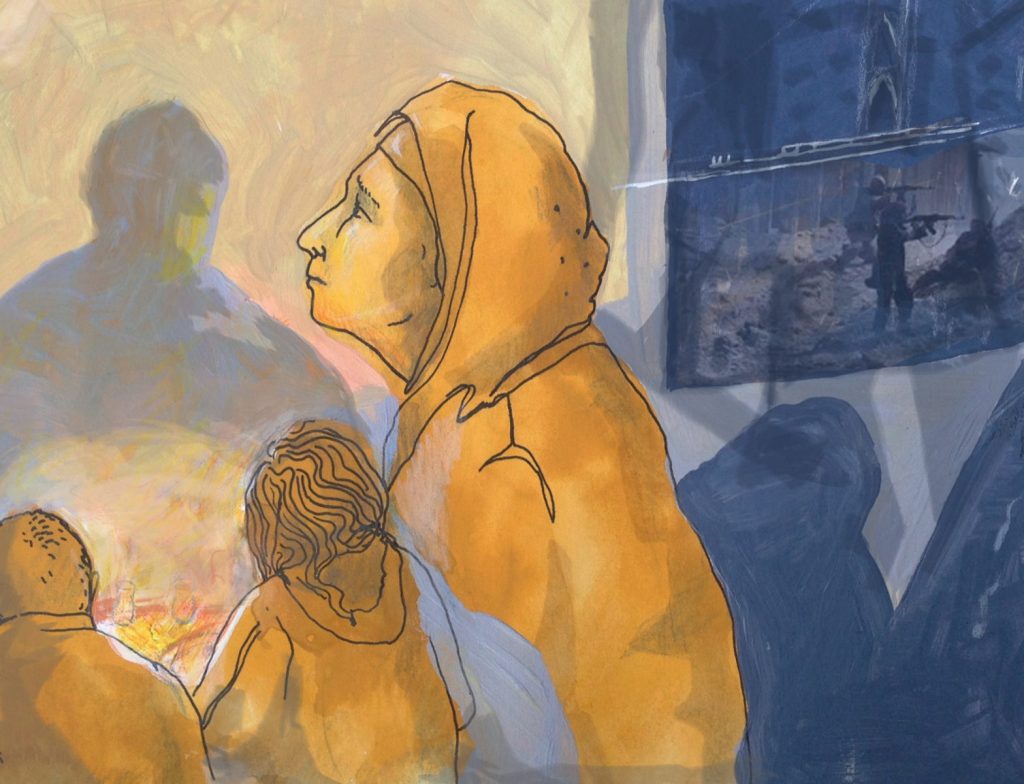 Radio HAKAYA – حكايا is a community radio project started by Brush&Bow in a refugee camp in North Lebanon. Radio Hakaya’s podcasts are with individuals whose communities have been directly effected by the war in Syria and the displacement of Syrians to Lebanon. Each podcast presents a subjective opinion that, combined with the rest of the series, provides a mosaic of differing experiences and perspectives of the reasons that people fled from Syria, of the living conditions in Lebanon and of the hopes and fears about what the future might hold.

This is the first podcast of an 8-part series. It is an interview with Um Saleh, a woman who fled the city of Deir Ezzor with her family in 2013. Sitting on the banks of the Euphrates and located in the oil-rich desert bordering Iraq, Deir Ezzor is the largest city in north-east Syria, and has been of strategic importance to all contenders throughout the Syrian civil war. Initially held as a bastion of regime forces for the first years of the war, opposition forces took most of the city and province of Deir Ezzor in 2013. During the next two years, Daesh (ISIS) quickly came to dominate opposition held territory, putting pro-regime areas under a crippling siege. The presence of Daesh turned Deir Ezzor and its surrounding region into a target of heavy air-strikes from the international coalition fighting Daesh.

The civilians that remained in Daesh-held territory faced a double fire: living under daily bombardment, whilst under the rule of a fundamentalist version of Sharia Law. Daesh militants needed civilians to live amongst so as to limit the intensification of air-strikes from the international coalition, whilst seeking popular legitimacy in the creation of the new Caliphate. Nonetheless, thousands of people attempted to flee the city. For those who managed to escape, the risks were high, with few places where to seek for safety. Whilst going to Turkey or to Kurdish-held territories would have been the closest option for civilians in Deir Ezzor, the Turkish border remained shut to those who could not afford being smuggled in, whilst the Kurds often also denied free passage, fearing the presence of terrorists amongst the Arab refugees who had lived in Daesh-controlled areas.

For many families there was no other option but to attempt to flee to other areas inside Syria, or to further bordering Arab countries such as Iraq, Jordan or Lebanon. The story of Um Saleh, collected in November 2018 in a refugee camp in Lebanon’s Bekka Valley, is the perspective of an average Syrian family from the outskirts of Deir Ezzor, who regrets the 2011 uprisings as having allowed such an escalation of violence and destruction in Syria.

Her experience represents only a fragment of the very complex puzzle of memories and positions Syrian civilians hold on the uprisings and the war that is tearing apart Syria, and should therefore be heard in relation to the contents expressed in the next upcoming podcasts of the series.

All recordings are taken, translated and edited with the help from members of the local community. For more information please visit: Radio HAKAYA – حكايا