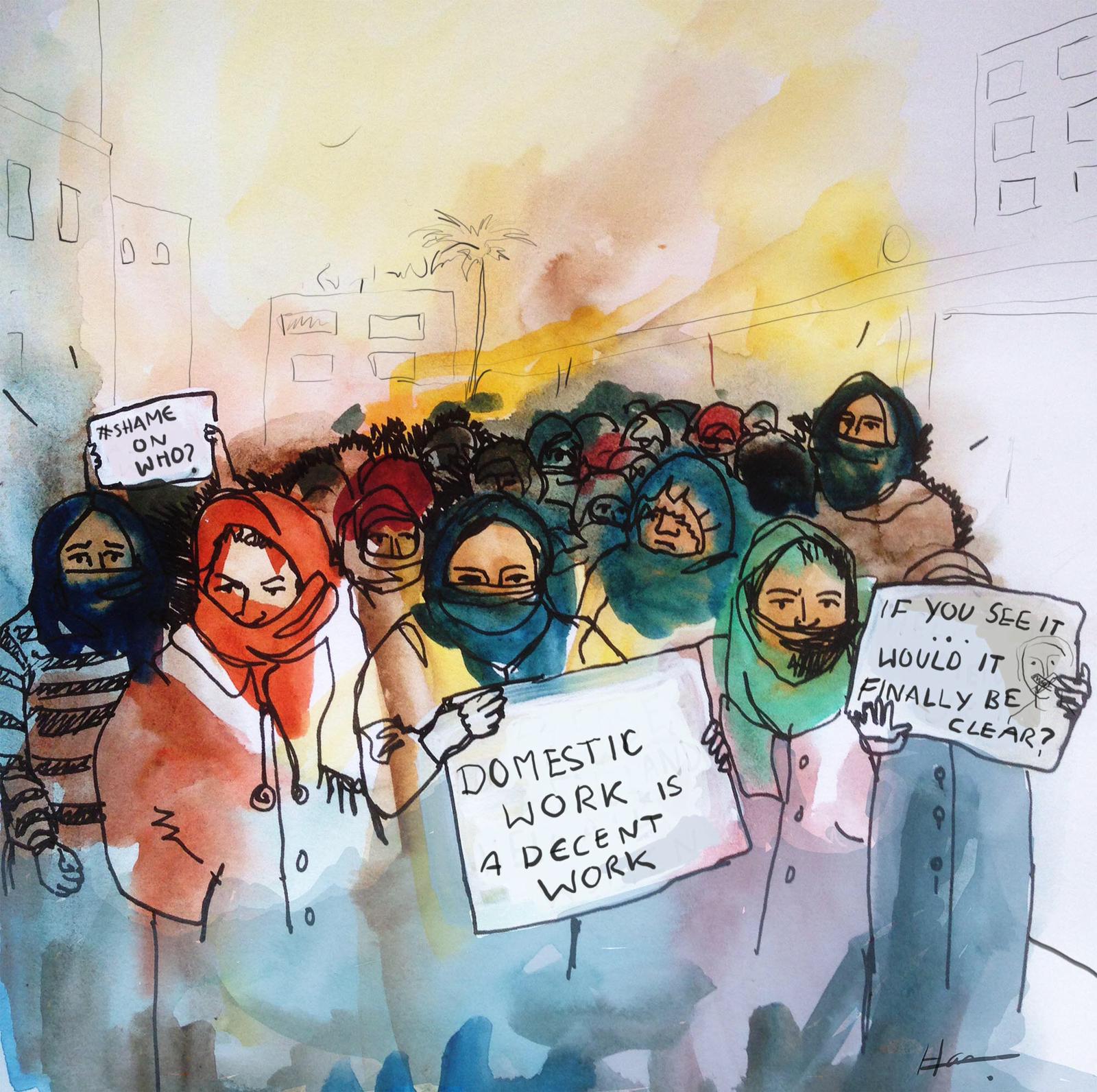 Domestic Migrant Workers protesting for their rights in Beirut, asking an end to the Rafaela system of employment which ties workers permanence status to the will of their employers. Illustrated by HannaH Kirmes-Daly

“There are not many jobs where the first thing your colleague says to you in the morning is, ‘We have another dead woman’,” read a recent post on the Facebook page of This is Lebanon. A small, volunteer-based organisation in Canada, This is Lebanon has taken on the huge challenge of tackling the endemic abuse of migrant domestic workers in the Eastern Mediterranean country.

With a population of less than 6 million people, Lebanon hosts more than 250,000 migrant domestic workers. Employed under the country’s exploitative kafalasponsorship system, they are excluded from Lebanese labour laws, a position that makes access to the judicial system close to impossible.

With a death rate of two such workers per week, This is Lebanon has opted for a radical new tactic to challenge impunity and achieve justice: the group is shaming employers who abuse their domestic workers on social media.

Whilst this new strategy is not without controversy, it has proven effective. Halima Ubpang, a Filipino domestic worker, was basically enslaved for 10 years by her Lebanese employers and only freed once the Canadian organisation made her case public. For years, her family had tried to contact Mrs Ubpang’s employers through the recruitment agency and the Philippines Embassy in Beirut, but never managed to get hold of her. Not knowing if Halima was even still alive, it was only when This is Lebanon named her employers on social media that public pressure pushed the family to allow her to return home.

“To this day we have rescued 41 migrant domestic workers and we are working on 95 other cases,” said Dipendra Uprety, founder of This is Lebanon. “We have had 1,492 of them contacting us for help over the past two years, with upward of five messages a day now that the site is more well-known.”

Uprety was himself once a migrant worker in Lebanon. He now lives in Canada under permanent protection status. During his time in Lebanon he was nominated as the representative of the Nepalese Consulate for his work visiting abused domestic workers in hospitals and prisons.

He explained how This is Lebanon first contacts accused employers privately upon receiving notice from a migrant domestic worker or anyone witnessing abuse. If the employers refuse to show proof of payments or, in the case of abuse, to allow the worker to leave the country and return home, their name is exposed on social media.

At first employers rarely responded to this tactic. As more people came to know about This Is Lebanon, though, it also became more effective. “Now about 50 per cent of complaints we receive about abuse or lack of payment are sorted without us having to go public,” said Uprety.

Such unconventional tactics are proving as successful for migrant workers as they are enraging for certain employers. Some have accused This is Lebanon of making unjust accusations, defaming families and their businesses. Recently, a major Lebanese TV showdescribed the organisation as a mafia-style gang organising blackmail campaigns to extort money. This is Lebanon responded by pointing out that blackmail and extortion rely on unwarranted demands.

Accusations of blackmail and the risk of defaming employers wrongfully are not the only challenges to the work of This is Lebanon. Uprety himself has been warned about an arrest warrant submitted to Interpol after the group reported abuse of migrant domestic workers employed by senior Lebanese officials and politicians.

And intimidation has not stopped with This is Lebanon’s activists. “I got a phone call [from the cybercrime bureau] warning me to remove a post from ‘This is Lebanon’ I had shared on my Facebook page,” Lebanese journalist Dalal Mawad told MEMO.

Mawad was not the only person to receive such threats from the cybercrime bureau. MEMOcontacted two other people who received similar calls, but who prefer to remain anonymous for fear of further repercussions.

In all three cases, the cybercrime bureau called warning that the son of a well-known Lebanese politician was filing a law suit against This is Lebanon, and that he was threatening to sue anyone who had shared the post and would not remove it from Facebook.

According to Wadih Al-Asmar, the director of Lebanon Human Rights Centre in Beirut, the cybercrime bureau can summon people for investigation only if requested by Lebanon’s attorney general. “Basically, they cannot ask people to remove social media posts until a judge has decided whether a post is illegal or not,” she explained. “What is happening with This is Lebanon is pure intimidation.” This has been emphasised by the fact that since the beginning of this week, access to the organisation’s website from Lebanon has been blocked.

“They have tried blocking our Facebook page too,” Uprety pointed out, “but every time our page gets blocked we write to Facebook providing evidence of what we do, and our page is rehabilitated immediately.”

So far, Dipendra Uprety and This is Lebanon have not been charged with defamation. Public opinion in Lebanon has to weigh the risk of defamation cases against the systematic abuse of workers taking place in many Lebanese houses. After all, This is Lebanon would have no reason to exist if migrant workers were able to access the country’s judicial system.

Under the kafala system, a worker’s legal residency is tied to their employer, making it very difficult in practice for a worker to complain about an employer without risking the loss of their status in Lebanon. “Workers become ‘illegal’ if the employment relationship ends for any reason, even if the employer failed to pay the worker’s wages or sexually assaulted her,” said The Legal Agenda, a local NGO in Lebanon which seeks to defend migrant domestic workers in court. The NGO’s 2018 study shows that most such workers with pending legal cases are deported from the country before they are able to represent themselves in court, thus making the task of accessing justice impossible.

On 11 March last year, Ethiopian domestic worker Lensa Lelisa gave This is Lebanon a video testimony of alleged beatings, threats and abuse from a hospital bed, where she was being treated after trying to escape by jumping off the balcony of her employers’ house. Once discharged from hospital, she was returned to her employer’s home forcibly and, later, when questioned by Internal Security Forces (ISF), she retracted her statement. Soon after, Lelisa was wheeled onto a local television show in the presence of her employers, where she once again retracted her allegations of abuse.

Lebanon’s general prosecutor subsequently dropped the case, triggering Human Rights Watch to issue a report stating that the ISF had singularly failed to provide Lelisa “with any guarantee of safety or protection to ensure she was able to speak freely.”

Later in 2018, Lebanese journalist Timour Azhari covered Lensa Lelisa’s allegations against her employers in an article for the Daily Star. Summoned by Lebanon’s cybercrime bureau and asked to remove posts and tweets concerning his report, he is being sued for defamation. Although his article was taken down from the Daily Star’swebsite, it remains on his personal blog.

For years, local and international organisations have been raising awareness to apply pressure on the Lebanese government to stop the systematic abuse of migrant domestic workers. On 24 April, Amnesty International released a report calling on the new Lebanese government to end an “inherently abusive migration sponsorship system, which increases [migrant workers’] risk of suffering labour exploitation, forced labour and trafficking.”

Shortly after assuming his new role in Lebanon’s Cabinet, Labour Minister Camille Abousleiman told the Daily Star that he will prioritise the modernisation of the labour law, with a focus on “treating foreign workers with respect, which reflects Lebanon’s civilised image.”

Publicly naming and shaming without a judicial verdict to back up the allegations does have its issues, as there is always the risk of defamation. However, considering the difficulties in place for migrant workers to access justice, This is Lebanon is succeeding where everyone else has failed, providing concrete help for such workers to achieve their rights and justice.

“Critics of This is Lebanon should first look at the failures of Lebanon’s non-existent legal justice system in relation to migrant domestic workers,” insists Farah Salka, executive director at the Anti-Racism Movement in Beirut. “Are all the cases on This is Lebanon 100 per cent accurate? I don’t know… But how does one really get evidence of all the atrocities that are happening in the houses around us in this country? If anyone has a better suggestion for bringing forth justice to domestic workers who have been abused and violated but cannot speak up since they’re still imprisoned in those same houses, then let them please come forward and do a better job than ‘This is Lebanon’.”

That is a serious challenge, and one which clearly has the authorities in Lebanon at a loss. Unless and until they do something more serious about this issue, though, then groups like This is Lebanon are essential for the protection of migrant domestic workers.

This article was first published on the 1st of May 2019 by Brush&Bow on Middle East Monitor.